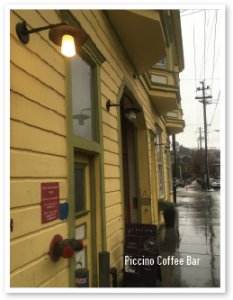 Besides its good coffee, Piccino Coffee Bar’s essential charm is that within the converted horse stables of Dogpatch’s iconic Yellow Building it occupies an alcove separate from its parent establishment – the upscale trattoria at 1001 Minnesota Street, with an around-the-corner entrance facing 22nd Street – which makes the tiny café, with seating for about six customers, feel – though internally connected – like a hidden and possibly rogue outpost, as if it were operated by Piccino employees without the knowledge of the larger restaurant’s owners or management.
Yet the house-made pastries, like the ginger scone and the pain au chocolat, are prepared with the same craft and seriousness as Piccino’s thin-crust pizzas and elegant salads. The coffee bar stays open later, 10 p.m., than any of the neighborhood’s other cafes. The absence of wifi allows the small coffeehouse to retain an old-world vibe. It opens at 6:30 a.m. on weekdays; 7 a.m. on weekends. 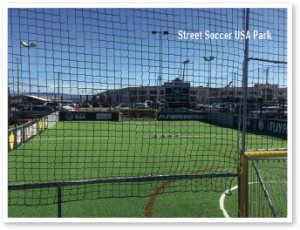 If I’m free in the early afternoon one of my favorite things to do is head to the Street Soccer USA Park, at Terry A. Francois Boulevard and Third Street, across Mission Creek from the AT&T Park. An extension of the popup restaurant village known as The Yard – a sort of miniature preview of the development to come – Street Soccer USA offers daytime soccer seven days a week in an immaculate facility containing lockers, scoreboards, flood lights, a sound system, and two small, artificial-turf pitches.

The soccer fields at Mission Rock, each just 72 feet long, are made for four-on-four games, a kind of outdoor futsal with its own unique set of rules, including an inviolable goalie circle and a requirement that each team keep one player permanently on offense. It takes some getting used to, but it’s fun and friendly, and there are lots of opportunities to play, including weekday lunchtime pickup, Monday through Friday, 11:45 a.m.; drop-in tournaments on Tuesday and Friday nights, 6:30 and 8:00 p.m.; and Saturday and Sunday afternoons, noon to 1:30 p.m.. The nonmember pricing is steep, ranging from $10 to $15 per session, but a $50 monthly fee provides unlimited drop-in access. Street Soccer USA – whose adult soccer programming generates funding for recreational opportunities aimed at underserved urban youth in 14 American cities – also offers organized league play. 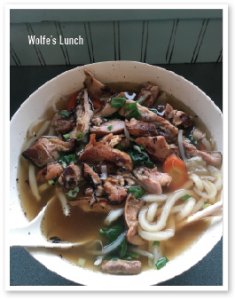 In Greater Potrero Hill my favorite restaurant that isn’t open for dinner is Wolfe’s Lunch, 1220 16th Street, a longstanding workingman’s lunch counter that, despite its outward appearance as a classic American diner, with a menu of burgers, cheesesteaks, and BLTs, additionally functions as an authentic family-owned Asian restaurant on the side, serving Korean and Japanese dishes like donburi, bibimbap, and udon, starting at 6 a.m., closed Sundays. The eatery’s modest interior, which sits amid a slightly forlorn stretch of blank-faced warehouses between the Hill and California College of the Arts, only adds to its appeal, and is reflected in the pricing, which doesn’t exceed $10 for any dish.  The food is delicious. 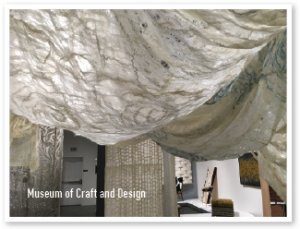 Last month, the Museum of Craft and Design, 2569 Third Street, which may be as well-known in Dogpatch for its gift shop as for its programming, opened three new exhibitions which will run until June 4 and are worth visiting:  Janice Arnold’s Felt DeCoded – Wool: Nature’s Technology; The wildLIFE Project by Wendy Maruyama; and Archive of Creative Culture, a multi-participant book collection representing major sources of inspiration for various artists and cultural figures. Arnold’s unabashedly, even humorously, enthusiastic tribute to wool and its variants embraces scientific, artistic, and historical perspectives to help visitors regain an appreciation for the genuine miracle of a common textile fiber. Using videos, touchable fabric squares, a science-class chalkboard diagram, and detailed timeline of early wool and felt production, the exhibition is both an educational lesson and an art experience.  Arnold gathered artifacts that range from a 19th-century Hungarian shepherd’s cloak to a 1950s American poodle skirt, placing them alongside her own felt creations, which comprise objects practical and decorative.

If Arnold’s space is celebratory, Maruyama’s is mournful, addressing the plight of the endangered African elephant and the callous ivory trade that began with the complete elimination of North Africa’s elephant population under the Roman Empire.  Today, there’s only about half a million elephants left worldwide. Maruyama, a Japanese-American furniture maker, has used wood panels to construct a collection of six hauntingly faceless, wall-mounted elephant heads. Apart from these the spare exhibition features only a transparent case of severed glass tusks and a Buddhist shrine in which a bell chimes every fifteen minutes; roughly as often as a real-life elephant is poached.

The Museum of Craft and Design also currently houses a cool smaller installation, Mixed Messages, created last fall for a year-long run by Chris Eckert, an artist who, feeling overwhelmed by the pace, horror, and complexity of current events and politics, decided to build, with the help of John Green, 24 Morse code telegraph machines that tap out the Twitter feeds of news organizations like the BBC and Al Jazeera in real time. As the media’s unceasing flow of information is reduced to a cacophony of unintelligible clicking, the project metaphorically dramatizes what Eckert calls “the saturation point” of consumption within the 24-hour news cycle. 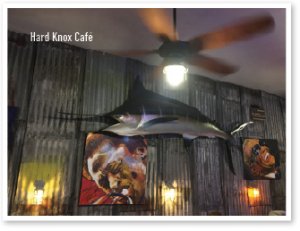 The museum closes at six, which makes the Hard Knox Café, 2526 Third Street, a sensible early dinner destination after a visit, as it requires only crossing the street. Its menu of filling soul food dishes – smothered pork chops, oxtails, chicken and waffles, and other Southern favorites, each of which comes with two sides and corn muffins – serves as an occasionally necessary counterpoint to San Francisco’s sometimes dainty food scene. You’ll be stuffed and, waddling out the door, probably ready to call it quits for the night.

“Corn and zucchini have been okay but most other produce has gone
The City and County of San Francisco is part of a growing
The Radiance, a 99-unit condominium building with entrances at 330 Mission Bay
On May 19th, shots rang out under the Interstate-280 overpass at Mariposa
The right-of-way located between San Bruno Avenue, 17th Street and Vermont Street
Go to Top