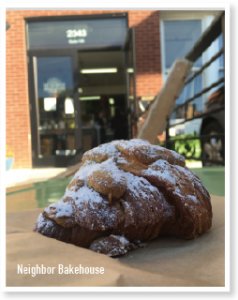 If you live in Dogpatch you probably already know, but it bears repeating: Neighbor Bakehouse, located at 2434 Third Street, is the best bakery, certainly in San Francisco, possibly in the United States. Really, if you’re interested in having a good life there’s no reason not to start every day there . . . except Monday and Tuesday, when it’s closed.

In spite of its illustrious breads and a strong daily selection of crispy, buttery pastries on both ends of the sweet-savory spectrum, it hasn’t yet attracted Tartine’s tourist crowd.  Reasonable lines move smoothly and without distraction through an interior that feels like a functional bakery, not a curated patisserie-restaurant. I can’t tell you what to order; anything or everything is excellent, from the pistachio blackberry croissants to the ham and cheese morning buns. 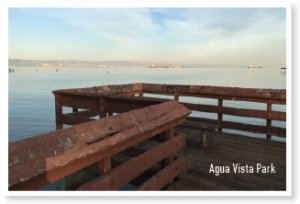 Now that you’ve had breakfast, a quick question: have you used the public fishing pier at Agua Vista Park, 801 Terry A. Francois Boulevard, for its actual intended purpose of fishing? I sometimes pass by and notice couples and families admiring the Bay view, but whether there are actual fish to be caught along the Central Waterfront is a mystery to me. Inspired by a San Francisco Chronicle article indicating that this winter, thanks to heavy rains, “has the chance to rival the best in history” for sturgeon fishing in the Bay, I picked up a rod and gave it the old college try.  Not with any real hope of snagging one of the supposedly abundant nine-foot sea monsters mentioned in the Chronicle, but maybe I’d get a jacksmelt or something.

I know virtually nothing about fishing.  My disappointment at the Agua Vista pier shouldn’t be regarded as a trustworthy sign that fish can’t be found in the area.  Indeed, I witnessed firsthand the easy success of a nearby waterfowl that, by dipping its beak beneath the surface, snatched prey that might otherwise have gravitated toward my inexpertly cast lure. Even so, it was a pleasant way to pass an uneventful sunny day. A few curious walkers strayed from the Bay Trail to chat with me as they admired my obviously futile efforts. I’ll bet you can do better. Fortunately, you don’t need a license to fish from California’s public fishing piers. Don’t wait too long, though: with the new Warriors stadium about to go up a few steps away, Agua Vista Park’s future shape isn’t clear. There have been rumors of a potential new ferry terminal, activity which might scare the sturgeon away. 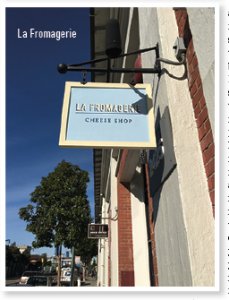 Because I failed to catch my own lunch, I visited La Fromagerie, 2425 Third Street, a cheese store that sells takeaway sandwiches until the late-afternoon. Unlike Neighbor Bakehouse, La Fromagerie doesn’t offer much in the way of outdoor seating, but the sandwiches – which come with chips or salad on the side – are great. The charmingly rustic shop offers wine and an impressive selection of about 50 gourmet cheeses, as well as French accents to rival the ones at Chez Maman on Potrero Hill.

If you’re following my footsteps, the final two stops are a little more challenging, located as they are on the western edge of this newspaper’s traditional coverage area, in the neighborhood the View has attempted to brand “Mishpot”: a term designating the zone between Highway 101 and Bryant Street, where the left side of Potrero Hill begins to blend into the Mission. Will this real-estate neologism ever catch on, as “Tendernob” definitely, and perhaps regrettably, has, or are we like Gretchen Wieners in Mean Girls, trying to make “fetch” happen when Regina George has already decided that it never, ever will? 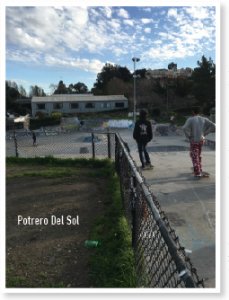 Feel free to let us know. In any case, the first of two Mishpot destinations is the skate park at Potrero Del Sol, on Potrero Avenue, below 25th Street, an expansive green space that boasts a community garden, outdoor performance space, and children’s playground. Despite its convenient back entrance on San Bruno Avenue, Potrero Del Sol seems to belong far more to the Mission than it does to Potrero, owing in large part to the longstanding closure of the 25th Street overpass, the Hill’s miniature version of President Trump’s border wall.

With an experts-only bowl and a vast plaza of ramps and rails, the skate park is the City’s largest. Even if you don’t skate, it’s worth stopping by to watch San Francisco’s most courageous and acrobatic teenagers do their thing. The bench just beside the graffiti-decorated concrete expanse is prime real estate for spectators. 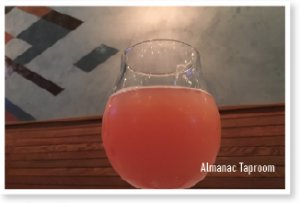 Finally, support a Dogpatch business without leaving Mishpot: the new Almanac Taproom at 2704 24th Street, just past Potrero Avenue. Almanac Beer Co., the City’s foremost purveyor of barrel-aged ales, doesn’t have its own brewing facility, generating most of its product on borrowed equipment in San Jose, but it maintains its company office at the American Industrial Center on Third Street. I assumed that, when the inevitable taproom emerged to showcase Almanac’s unique line of small-batch beers, it, too, would be located in Dogpatch. Instead, co-founders Jesse Friedman and Damian Fagan chose a storefront on leafy 24th Street, the Mission’s most attractive commercial corridor.

Although it replaced the casually upscale Sous Beurre Kitchen, which closed last spring, rather than a taqueria or neighborhood grocer, Almanac Taproom may nevertheless represent a yuppie intrusion to some, as it fronts the Calle 24 Latino Cultural District, whose historic character and vibrancy one hopes will survive changes in the larger neighborhood. Now it’s possible, just a block or two from La Torta Gorda, to pay $13 for 11.2 ounces of draft beer.

The beer—produced in collaboration with small Northern California farms that grow the plums, blackberries, grapes, and apricots added during fermentation—is incredible. You can order a burger, banh mi, or sausage sandwich to go with it.  From the refrigerator in back pick up a to-go bottle of Almanac’s Dogpatch Sour, a “lightly tart ale” that’s “brewed with California Rainier cherries, using a house blend of wild yeasts, bacteria, and SF sourdough yeast.” When you stumble back out onto 24th Street after a few hours, befuddled and bankrupt, Potrero Hill will look like a mountain, and getting home—if you live on the other side—will seem impossible: the truest sign of a great day.

This monthly feature provides a series of 12-hour proposals—configurations of potential perfection within the paces of daily life —for residents and visitors to the land once known as Rancho Potrero Nuevo, more or less between the waterfront and the Mission.  Send your nominations for possible inclusion to editor@potreroview.net. Photos: Brett Yates

A group of Potrero Hill residents, with assistance from Hibiscus Studio, is
Like many others, shelter-in-place orders and likely lingering constraints on large gatherings
A handful of civic organizations track land use changes in Dogpatch and
A proposal to open a cannabis dispensary at 667 Mississippi Street will
Cycling Potrero Hill can demand more than a strenuous climb or two…or
Go to Top