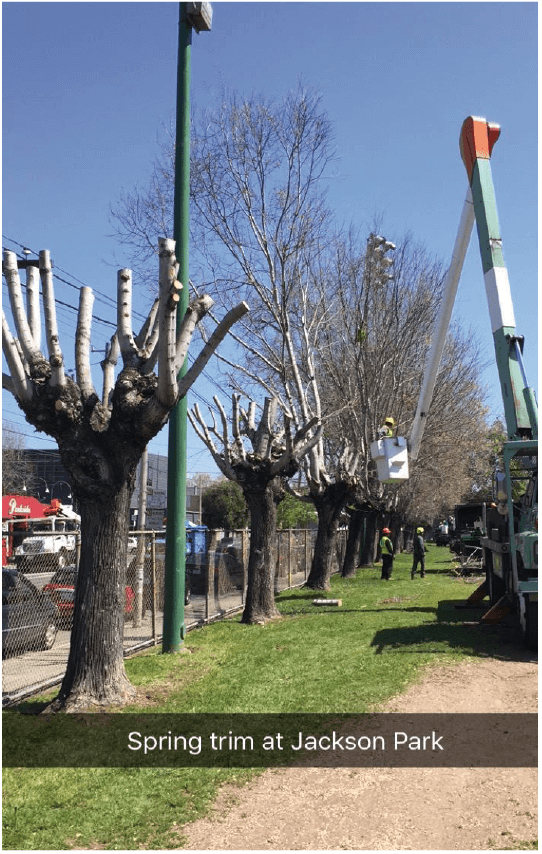 Jackson Playground, a 4.41-acre public park managed by the San Francisco Recreation and Park Department that features sports fields, basketball and tennis courts, first opened in 1912. Bounded by Carolina, 17th, Arkansas and Mariposa streets, the space is located across from Live Oak School.  Several recently or soon to be completed residential buildings – including 172-unit Potrero Flats at 1301 16th Street, a 299-unit project underway at 1601 Mariposa Street, and 127 units at 88 Arkansas Street – are steadily increasing pressure on a resource that’s historically drawn visitors from throughout San Francisco.

“Jackson Park is one of the principle baseball and softball facilities in the City, and is predominantly used by people outside of Potrero Hill,” offered J.R. Eppler, Potrero Boosters president. “This was acknowledged by the Eastern Neighborhoods Plan, so it’s about reconfiguring it to provide a better balance that will serve local residents.”

Eppler explained that the considerable amount of residential development slated for Potrero Hill was envisioned by the Eastern Neighborhoods Plan, adopted by the City in 2008 with implicit requirements that enhanced open and recreational spaces would be provided. Jackson Park was identified as a resource that’d be expanded and improved.

In May, research presented at a Citizens Advisory Committee of the Eastern Neighborhoods Plan meeting indicated that Jackson Playground had more than 2,250 users weekly, including 325 Live Oak students and school staff daily.

“Jackson Playground is one of our most popular ball fields for baseball, softball, and kickball,” commented Joey Kahn, media relations and policy manager, RPD. “Since many SFUSD schools do not have their own baseball fields, they often use ours for these activities. Adult softball and kickball games are often held in the evenings as well. Live Oak School uses the park during the day for recreation. Thousands of people use the park per week. In addition to after-school programming, we use the site for Pacific Arts and Junior Giants summer camps. San Francisco Youth Baseball League also uses Jackson Playground.”

In addition to the athletic fields, the park features two play structures for children, with a sand area, community garden, grassy open space and clubhouse equipped with restrooms.

“Much of the northern part of the neighborhood has been up-zoned for residential, so it’s the general increase in development, more than specific projects, that are expected to increase usage of the park,” said Eppler.

Eighty percent of the voters favored expansion into Carolina Street, with almost half supporting the third option, one-third the second, and just 15 percent the first. A prevailing sentiment was to preserve street parking around the park; Arkansas Street will remain intact if the project proceeds. The renovation could increase the park’s open space area by 900 percent, playground by 175 percent, community gardens by 280 percent, as well as add a dog run and public plazas.

The design emphasizes green space and amenities, such as community gardens, over sports facilities, in an effort to balance the needs of nearby neighbors with other City residents.

“Friends of Jackson Park’s proposal does a good job of achieving that balance,” said Eppler.

Santa Clara-based Verde Design, San Francisco Parks Alliance, RPD, and Friends of Jackson Park have been involved in the renovation visioning process. A project feasibility study is being conducted to investigate whether there’s any hazardous material on the site, estimate renovation costs, and develop a concept plan to be submitted to the City.

According to Jude Deckenbach, executive director of Friends of Jackson Park, Dogpatch-based Fletcher Studio has been hired as the project’s landscape architect, and will manage the hiring of consultants through a request for proposals process to conduct the various aspects of the feasibility study. Jackson Liles Architecture, also located in Dogpatch, will be involved in early project stages. Deckenbach hopes that plans will be ready by this fall, with construction starting as early as 2020.

“We are thrilled to be working with Fletcher Studios for various reasons,” Deckenback commented. “Their outstanding work is number one, but especially relevant to the Jackson Park project is that they are also the landscape architects for the 1601 Mariposa project, which is directly across the street from Jackson.  We will line up the new Mariposa Street entrance into the park with the north-south green passageway on the 1601 Mariposa Street project to create a lovely greenway connection for all.”

When the Bay Area shelter-in-place mandate went into effect in mid-March in
Is it presently possible to take SAT or ACT tests?  The College
San Francisco Unified School District (SFUSD) staff have confirmed that pre-construction activity
During the first quarter of 2020 Mission Bay biotechnology companies and nonprofits
Like many others, shelter-in-place orders and likely lingering constraints on large gatherings
Go to Top