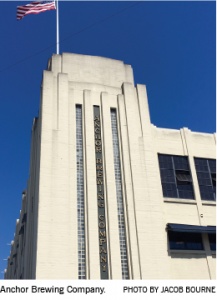 “The neighborhood is evolving quite a bit, and it’s nice to see some community-focused breweries in the area,” expressed Joanne Marino, executive director of the San Francisco Brewers Guild.

The Guild, a nonprofit, was launched in 2004 to celebrate the craft of American beer and the City’s brewing heritage. It sponsors Drink SF Beer, a shuttle service that rotates through several neighborhoods, stopping at participating breweries on the way. In July the shuttle ran its Union Square/SoMa line, hitting such spots as Local Brewing Company, Black Hammer, Thirsty Bear, and 21st Amendment. The shuttle toured Dogpatch in May, and will return to the neighborhood on August 17. Hosted by Triple Voodoo Brewery, the tour will visit Anchor Brewing Company, head south to Bayview’s Speakeasy Ales & Lager, and back to Dogpatch for beers at Harmonic Brewing and Magnolia Brewing Company.

“It’s a nice loop and we’ve gotten great feedback,” Marino added. “People have become more aware of all the great neighborhood breweries. Triple Voodoo is fairly new. Magnolia is a couple years old. We’re excited to have a critical mass for the Dogpatch up and running.”

Harmonic Brewing, at the southernmost end of 26th Street, is housed in an industrial warehouse with contemporary styling. Led by Ed Gobbo, Jon Verna, and Eric Tisch, who quit their day jobs to pursue their passion for making and selling beer, the brewery strives to evoke a family-friendly vibe, where dogs and kids are welcome if accompanied by a parent.  “We’re planning our one year anniversary party for September 17th, that’ll be onsite at the brewery, but we also hope to have a block party and are working with the City to get a street closure,” said Verna. “It’ll be an all-day party celebrating the community and other businesses we’ve established relationships with.”

Harmonic’s two feature brews are Rye Old Fashioned Pale, inspired by the old-fashioned cocktail, with a bitter, citrus twist; and the Harmonic Kolsch, its most popular beer, similar to a pilsner but dependent on ale yeast that’s specific to Cologne, Germany.

Magnolia Brewing, adjacent to Smokestack Restaurant on Third Street, was inspired by Dogpatch’s rich history to provide a rustic, comfortable space where a 20th century shipyard worker might stop by for a beer straight from the docks. In addition to draught and cask beer, the brewery serves a full menu of artisanal American cuisine.

Also on Third Street, Triple Voodoo Brewery and Taproom specializes in a fusion of Belgian and West Coast brewing methods that results in unique creations, such as its Inception Belgian Golden Ale, a bright, crisp beer designed to be a “kaleidoscopic experience.” The brewery opened in Dogpatch in 2013.  It’s recently partnered with the ALS Foundation to fight Lou Gehrig’s disease with proceeds from sales of its upcoming ALS IPA. Triple Voodoo will donate $1 for every pint sold of this specialty beer, made with experimental hops, with lots of aroma and flavor.

Anchor Brewery, on Mariposa Street, began during California’s Gold Rush in 1849. Today, Anchor Brewery’s beers can be found around the country and parts of the world. A recent creation, the Go West! IPA, is a complex blend of four American hops with scents of citrus and pine.

A regular Local Brewing patron, “JJ”, discovered the establishment by chance one day and now stops by for drinks and conversation about twice per week. “I always feel welcome when I go there,” JJ commented. “What’s really interesting is that the age range is from 22 up to 80. I’ve had some really interesting conversations with a variety of people there. My favorite beer is the Sutro Tower Stout. It’s a dark stout beer with a nice thick coffee taste. That’s my go-to beer.”

Closer to the Bay, 21st Amendment Brewery and Restaurant got its start in 2000 after Nico Freccia and Shaun O’Sullivan, who came from Southern California five years earlier, teamed up. O’Sullivan, a former photographer and paralegal, “Traded his suits for boots and was saved by beer.” Freccia, a writer, actor and avid homebrewer, hatched a plan to start the brewery while taking a brewing science class at the University of California, Davis alongside O’Sullivan.

One of its more recognized beers is the Brew Free! Or Die IPA, which is aromatic, and makes quite an impression at the first sip while leaving a clean finish.

On August 27 Thirsty Bear Brewing Company will celebrate its 1996 opening. Located on Howard Street, the brewery is certified organic, featuring malts and hops that have been grown under organic conditions. Thirsty Bear was founded by Ron Silberstein, a brewmaster who had originally wanted to open a location in Spain.  When that plan fell through he started in the City instead. The brewery includes a full restaurant that serves Spanish-inspired cuisine and bar service.

An ultra-laid back, low-key spot for drinks is Bar Basic, on Brannan Street, conveniently located two blocks from Caltrain. The establishment is known for its many televisions airing sporting events, an interactive jukebox called Rockbot, and a Super Nintendo game console for use by patrons. Free food and prizes can be won on Tuesday evenings during trivia night.

“Bar Basic was established in 2010 with the goal of creating a comfortable neighborhood atmosphere,” said Mike Limanon, manager and owner. “We have a large selection of whiskey and our cocktail menu focuses on the classics with some slightly modernized variations.”