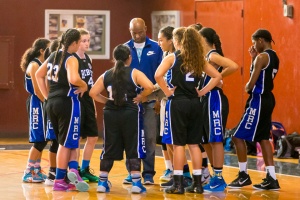 The MRC Rebels Girls Basketball Club was founded in 1988 by Oscar Jimenez, who saw a lack of basketball opportunities for San Francisco girls and sought the City’s help to fill the gap. The program received City funding early on, though Jimenez paid for some expenses out of his own pocket. When Jimenez died suddenly in 2010 at the age of 57, many of his youthful club members lost a mentor and father-figure. Slowly, with the help of new talent, the club has successfully rebounded.

“It’s unique because of its legacy and affordability,” said assistant coach, Mark Reppert. “We have girls coming up from South City largely due to the legacy created by Oscar. The team is made up of girls from an array of backgrounds and cultures, which I think is rare for San Francisco these days. This diversity represents what the Mission is at its heart.”

The club is based at the Mission Recreation Center, 2450 Harrison Street, and offers year-round basketball training by skilled coaches and teachers for girls from third grade through high school. It’s the Bay Area’s oldest member of the Amateur Athletic Union (AUU), with funding from the San Francisco Recreation and Parks Department. Parents of players who want to compete in AUU tournaments pay $450 per season, unless they qualify for a scholarship. About 20 percent of players get financial assistance from the City to play.

Wilson Stevens, MRC’s director, joined the program two years ago as a coach after an eight year professional basketball career in Europe. Stevens is originally from San Francisco, attended Everett Middle School and started playing basketball as a youth.  According to Stevens, it took dedication to recover from Jimenez’s death. “We have a very different group of coaches and they’re all phenomenal,” Stevens said. “My first coaching experience was at MRC, and it was an adjustment to start coaching younger players. Patience has helped me become a good coach and having my three year old son has helped me become patient. Our program is different because we don’t turn anyone away. We try to get inner city girls off the street and pro-vide them with basketball experience. The ultimate goal is to get the girls a college scholarship. Even if they don’t get a scholarship, the program provides them with a chance to develop them-selves and their skills.” At least 67 MRC players have gone on to play at the college level, including at Pepperdine, University of California, Berkeley, Princeton, Stanford, and Duke.

Head coach, Rod Hodges, has a 14 year history with MRC, witnessing its evolution. “Oscar was a big influence on my coaching as well as on a lot of the girls in the community,” Hodges commented. “He took everybody in. A lot of the girls had no other outlets other than basketball. He was able to get coaches who were busy to donate their time. Coaches saw him giving back to the community and wanted to join his effort. Wilson is doing that now. Wilson is a lot like Oscar and has brought back the vision that was lost after Oscar passed away.”

City funding is integral to MRC’s success. As the only AUU basketball program in San Francisco that receives municipal money, scholarships are offered to residents on an as-needed basis. This support enables the program to welcome girls regardless of their skill level. However, the program could use more help. “The City only funds the high school team. If we had more sponsorships we could afford uniforms and equipment for the younger girls,” Stevens said. “Some of the parents can’t afford to travel to the farther games, so the sponsorships could help parents get to their kids’ games. Those who make donations to the City can get their money earmarked to the MRC and receive a tax deduction.”

The club raises money by operating a concession stand during games, which helps support expenses not covered by municipal funds. “When girls on trips can’t afford to buy meals on the road, Wilson makes sure everybody has three meals a day,” Hodges remarked. “When we were in Chicago, he made sure there was time for girls to experience the city. He’s making it about the girls. He doesn’t care if they have money or not. If a girl wants to play that’s all that matters.”

Lakeview resident Kim Gainer, an MRC volunteer for the past 15 years, has two daughters, Amber and Alani, playing for the club. Her oldest daughter, Ashley, also partook in the program, and currently attends Florida A&M University, where she’s participated in varsity and intramural teams. “People call MRC their home,” Gainer said. “The coaches and staff really care about the players. Everything has been about the girls. I can’t speak more highly of the coaches and staff. We have girls coming from American Canyon and Antioch; it’s amazing.”

MRC has been able to regain its momentum despite the downward spiral it took follow-ing the death of Jimenez. Parents and players disheartened by his passing lost faith in the program; many left. Those who stayed were disappointed by interim leadership who wanted to do things their way, and focused more on rules and regulations than creating a supportive commu-nity. But some, like Gainer and her daughters, stuck with the program.  Over time, players who had left rejoined the club.

An evaluation system is in place that allows parents and coaches to monitor the pro-gram’s quality; feedback has been positive. MRC has more than 100 players and four teams, with games scheduled for Portland and Chicago this July. Competitions are mostly in the Bay Area but once a season a tournament will often be held in Reno or Anaheim. The high school team travels further, including to Las Vegas and San Diego during the summer to showcase their skills in front of college coaches and nationally-ranked competition.

Even after spring tryouts — to evaluate players’ skill level, sportsmanship, and focus — girls are encouraged to join the club, with program staff conducting outreach to local schools. “We feel that there are girls who still feel they don’t have a place to go and want to be part of a supportive community,” Hodges said. MRC doesn’t make cuts and accepts players of all levels.

For Reppert, MRC basketball is much more than about winning games and college scholarships. He wants the program to have a family atmosphere, where the focus is on educating girls to love the sport and gain life lessons that can be used on and off the court. “Word of mouth has really spread the program,” Reppert offered. “We understand that this is a journey, not a destination that will be reached overnight.”

Shortly before the start of the pandemic, Smuin Contemporary Ballet and the
United States Representative, District 11: Nancy Pelosi. Our hometown congressional hero is
Eastern medicine – which focuses on treating the person rather than the
Passersby may have noticed two rows of identical bungalows huddled together on
There’s been a coffee shop at 301 Arkansas Street for the last
Go to Top