The San Francisco Municipal Transit Agency (SFMTA) will consider expanding on-street parking for car share companies when its board of directors meets in March.  San Francisco may be the only U.S. city in which public transportation, parking and taxi medallions are all governed by one agency.

As part of a pilot program, started in 2013 set to expire this year, SFMTA rents 205 curbside spaces to Zip Car, Getaround and City CarShare. At pilot launch the agency declared that car sharing met several SFMTA goals, notably a reduction in the number of vehicles in the City, which results in improved parking management and lower greenhouse gas emissions.

At the time, SFMTA compiled a list of 900 on-street spaces for possible car shares.  However, Andy Thornley, who heads the program, said that he doesn’t believe the program will expand that drastically. Thornley, who indicated that his team would be recommend enlarging the initiative, stated that the exact number of additional car share space is yet to be determined, and that, even if the board approves expansion, taking additional parking spaces from general use will require public outreach.

Proposals to remove public parking spaces generally invite controversy in room-constrained San Francisco, particularly if the spots are near businesses that rely on car traffic. There are currently seven pairs of on-street spaces set aside for car shares in Potrero Hill and Dogpatch, but it’s the one in a commercial corridor – the two Zip Cars in front of the Potrero Branch library on 20th Street – that’ve drawn the most complaints.

“It’s the worst thing that’s happened to businesses here,” bemoaned Khaled Ghanma, who owns All States Best Foods across the street. Many of his customers come by automobile.  According to Ghanma, library patrons often double park when making drop-offs, a situation he called dangerous.

Kayren Hudiburgh, who owns nearby The Good Life Grocery, shared the sentiment. “I don’t think they should be taking parking on the street,” she said. “They are taking two prime spots for customers. If customers can’t find parking, they go on by and find somewhere else to shop. It’s hurting small businesses.” She wondered why an arrangement couldn’t be made with the nearby College of Traditional Chinese Medicine, which has a parking lot.

The autos in front of the library have been popular with Zip Car patrons.  A one-year evaluation by SFMTA found that one car had 89 unique users; the other 67. While there’s some overlap in the figures, a third of the time the vehicles were being used eight hours a day. “By any measure that is very high,” said Thornley, who noted an average car share space garners 19 unique users.

Zip Cars at 20th Street, across from Esprit Park, and at 20th and Third streets, across from the start of the 22-Muni line, also have had high usage, according to Thornley. The only business near the latter is LaLanne Fitness, which has struggles finding parking for its employees. “Parking is terrible,” said owner Chris LaLanne, although he blamed much of the shortage on UCSF commuters spilling over into the neighborhood. 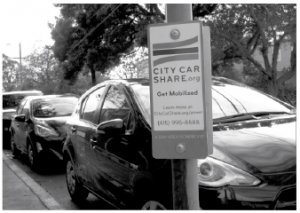 Other locations have been met mostly with indifference by neighbors. City CarShare has two spaces on Third Street in front of Dopatch Wineworks.  According to Joel Creager, who manages events there, the company gets special parking permits for its proceedings and is unaffected by the loss of spaces. Getaround’s pair on Minnesota Street just east of the Caltrain station is located off a commercial corridor but the spaces are next to a paid parking lot. Mark Dwight, who owns nearby Rickshaw Bagworks and recently launched the Dogpatch Business Association, said he hasn’t heard feedback about them one way or the other.

SFMTA placed the other pairs next to City-owned property. Zip Car has two spots in front of the municipal railway office on Pennsylvania Street; City CarShare has two abutting the reservoir on 22nd Street.

Getaround, which claims to be the Bay Area’s largest car-sharing platform, with 200,000 users, differs from the other two companies in that it runs a peer-to-peer model.  Instead of owning a vehicle fleet it relies on people offering their own autos for rent. As a result, it has several cars available at any given time on the Hill, the parking whereabouts left to the vehicle owners. The business also maintains two additional off-street fixed spots at 18th and Indiana streets. Last year, Getaround purchased City CarShare, which fields 200 cars in the region. Those vehicles continue to be owned by the same company, Carma, but are offered on the Getaround platform.

As part of the SFMTA pilot, the companies pay $225 a month for the Potrero and Dogpatch parking spots; there are additional zoned areas in San Francisco where the fee is less; $150 and $50. There was a $400 installation fee to cover signage and curb painting. Since it’s not practical to have the cars moved for street cleaning, the companies are responsible for space maintenance.

While SFMTA sees one of the pilot’s benefits as increased car sharing visibility, the three companies aren’t the only ones offering the service in what’s become a burgeoning field. Turo and Just Share It offer peer-to-peer programs. Audi on Demand will deliver a high-end car to your doorstep. Upshift will do the same and pickup at a designated time, although with a more modest Prius. Upshift hasn’t expanded to Potrero Hill; since its delivery drivers return on bicycle the terrain poses difficulty for that business model. Enterprise has a fleet designated for car sharing, with a pickup at 24th and Utah streets. General Motors is the newest entry to the San Francisco market, offering its vehicles under a company called Maven.

The number of competitors prompts experts to believe that car sharing continues to grow despite a dip in users nationally in 2015. At that time, Hertz, Enterprise, Zip Car – which is owned by the Avis Budget Group – and car2go made up 95 percent of the U.S. market.  Hertz ceased its American car share operations, which played a part in the declining figures. The rise of Uber, Lyft and other competing services, such as scooter sharing, also have cut into the market, according to Susan Sheehan, who has been researching car sharing for 20 years and is co-director of the University of California, Berkeley’s Transportation Sustainability Research Center. Nonetheless, she believes the market is still expanding, with the 22,000 vehicles available for car sharing in the U.S. and Canada at a historic high. The trend has come a long way since City CarShare became the first San Francisco operator in 2001 with a dozen Volkswagen Beetles.

Sheehan, who first became interested in car sharing as a way to reduce carbon dioxide emissions, pointed to several studies that claimed that a shared vehicle can replace the needs of four to 20 owned cars. In some analyses, up to 32 percent of participants have sold their vehicle after joining a car sharing program, with a greater proportion delaying purchasing one. Research indicates that car sharing vehicles get 10 miles per gallon more than the average auto on the road.

“Car sharing turns the fixed cost of ownership to a variable cost,” Sheehan explained. “When someone switches to a variable asset they are typically making more choices about how they travel and the expense.” That is, not only might people choose to drive less but by eliminating car payments, insurance, parking and maintenance costs, she estimated that people can save $200 to $300 per month.

Fewer cars on the road appeal to SFMTA. “A lot of folks want to own just enough car,” said Thornley. “You don’t really need a car 24 hours, seven days a week. Most cars are parked 90 percent of the time.”

SFMTA estimates that there are 275,450 on-street parking spots in San Francisco, 10 percent of which are metered. It further gauges that there are another 200,000 spaces in private or SFMTA-managed parking garages.

The municipal planning code requires new buildings with 50 to 200 units to set aside one parking spot for car shares and an addition space for each 200 units thereafter. Zip Car has three spaces at Potero 1010, its only other Hill location than the City-allotted on-street spots.  However, according to Thornley the number of car share spaces isn’t keeping up with the parking lots dislocated by development, which impacts car owners and sharers.  Thornley pointed out that “at a time when we are hoping to get more car sharing spaces (off-street), we are losing a lot of those.”

In determining how to proceed with the on-street parking program SFMTA will be examining whether a space is more beneficial for general use or for a car share. It also will have to deal with critics of renting public space for profit. “We wouldn’t just let a corporation rent out a space on a curb and sell ice cream on a stick or something,” Thornley said. “But the fact is we are getting more crowded, but we are not getting more curb. How can we manage the curbs so there is equitable use for it? Do households that don’t own a car get to use that curb? That’s going to make the curb go further.”

Since implementing the pilot program SFMTA has learned a few things about where spots work best. Putting them at the front or end of blocks helps people who don’t frequently drive park more easily. That those spots are often vacant helps sightlines for pedestrians, and ensures that a taller vehicle or truck doesn’t occupy the space next to a crosswalk. It surprised Thornley that usage is spread across San Francisco. Some parts of the Sunset get as much use as cars downtown.

One thing SFMTA will likely not do is provide on-street parking for companies that only offer one-way trips. In its pilot program the agency required a round-trip model; the same car that leaves the spot returns to it. There are practical reasons for this approach; SFMTA fears that cars will wind up at places like a Caltrain station while the designated parking spots remain empty.  In addition, the one-way trip model competes with Muni and taxi service.  The lack of on-street parking is one reason BMW’S Drive Now suspended its San Francisco operations in 2015, and why car2go doesn’t operate in the City. Oakland and Berkeley, by contrast, are in the process of launching on-street parking programs for one-way usage.

Decathlon, one of the world’s largest sporting goods retailers, opened an outlet
Over the past decade and a half Potrero Hill has become denser
Dogpatch, once thought of as Potrero Hill’s ugly stepsister, not long ago
A family that’s owned land for four generations at the southern tip
Pera, a Mediterranean restaurant, is celebrating ten years on 18th Street.  Irfan
Go to Top