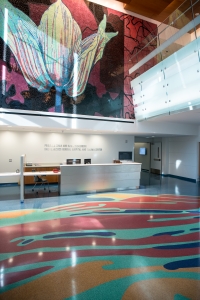 Located at Potrero Hill’s western edge, San Francisco General Hospital (SFGH) has long demonstrated its commitment to public health. With 70 percent of its patients un- or underinsured, SFGH tends to the poor, working families, undocumented immigrants, and the elderly, regardless of their ability to pay. The hospital’s new nine-story Acute Care and Trauma Center, designed to withstand up to an 8.0 magnitude quake, further anchors the institution’s promise to provide quality care to those it serves.

Construction mostly was completed late-last year; it’ll open its doors to patients this May. Until then, more than 5,400 staff members are being trained to use the facility’s new equipment.  These include cardiac telemetry, which can be deployed to observe patients throughout the facility; physiological monitors, which provide early detection of a patient’s deteriorating condition, and allow for digital communication directly to electronic medical records; and interventional radiology equipment that can be used for non-surgical interventions.  The hospital—renamed the Priscilla Chan and Mark Zuckerberg San Francisco General Hospital and Trauma Center— is also undergoing the official state licensure process.

The 283-bed facility has significantly more capacity than what it replaced, with three more operating and two additional trauma rooms. The emergency room is nearly double the size of the old one; the number of emergency beds has almost tripled, to 58.

The building’s design promises a better experience for patients, staff, and visitors. “There was a huge amount of staff input into the design,” remarked Roland Pickens, the hospital’s interim chief executive officer. The facility’s curved exterior reduces the likelihood of accidents caused from turning around sharp corners. Glass walls maximize natural light. Nearly 90 percent of patient rooms are private, with single-beds. “We now have a building as shiny as our clinical reputation,” Pickens commented.

In accordance with the City’s 2 Percent for the Art Program, two percent of the project budget was spent on artwork. “One of the defining features of the new hospital is the preponderance of art,” said Pickens. “Oftentimes I feel like I’m going to an art gallery or museum rather than a hospital.” Much of the featured art was produced by local creatives working in a variety of media.

The decision to build a state-of-the-art facility didn’t emerge from a particularly shiny period in the City’s, or Country’s, economic history. At the height of the 2008 recession, the City and County of San Francisco asked voters to approve Proposition A, an $887.4 million bond measure to fund hospital renovations that’d comply with seismic standards and accommodate more patients. Almost 84 percent of voters supported the measure.

However, the bond measure didn’t pay for furniture and equipment, significant expenses. The San Francisco General Hospital Foundation, the hospital’s fundraising arm, stepped in to cover those costs through a campaign to secure philanthropic support. To date, the foundation has raised more than $141 million from a combination of private donors, foundations, and corporations. “The result is a major improvement to the patient experience. The hospital will open with cutting edge technology and equipment,” Amanda Heire, the foundation’s CEO, said. “It’s still the people’s hospital, though. It exemplifies the philosophy and values of the hospital to provide quality care for everyone. This new building is a symbol of that.”

The largest donation was from Mark Zuckerberg, founder and CEO of Facebook, and his wife, Dr. Priscilla Chan, a pediatric resident at the University of California, San Francisco, who completed part of her training at SFGH. In a highly publicized act of philanthropy, the couple donated $75 million to the hospital last year, a gift Pickens described as “transformational.” Soon after, the SFGH’s Board of Supervisors approved a measure to change the hospital’s name to the Priscilla Chan and Mark Zuckerberg San Francisco General Hospital.

Not everyone is celebrating the hospital’s name change, though. An online petition with nearly 700 signatures calls on Mayor Edwin Lee and the San Francisco Health Commission to block the renaming.  According to the petition, the public’s collective contribution through Proposition A was more than ten times the size of Dr. Chan and Zuckerberg’s donation, yet the public “never had a chance to support or oppose the renaming of the hospital.”

“I can respect that opinion,” noted Pickens, in response to those who oppose the name change, “but it’s hard to count on county dollars to fund the hospital. We know we are still going to be true to our mission of providing care to underserved patients, so I see this as a win-win situation.”

“It is a very standard practice that naming opportunities are available to donors,” said Heire. “This will attract continued philanthropic support.”

Last fall, Sasha Cuttler, R.N., Ph.D., a SFGH nurse and union representative to the SEIU Nurse Alliance of California, published an article on Alternet.org, “San Francisco’s General Hospital Belongs the Public: It’s Not Zuckerberg’s Plaything.”  “We need to accept philanthropy, but we’re the ones who paid for the hospital. It belongs to us, not Mark Zuckerberg. There should be public input. There should be a ballot measure,” Cuttler remarked in an interview with the View. “Just because it is a ‘so-called’ standard practice to name buildings after donors doesn’t make it ethical.”

Pointing to the hospital’s “Wells Fargo Plaza” and “Bank of America Surgical Unit,” Cuttler argued that renaming the hospital is part of a larger trend of corporate donors turning the facility into “a billboard. We had a bait and switch. The public paid for the bond measure, but now it’s the Zuckerberg, Bank of America, and Wells Fargo hospital; the same banks that profited off the misery of our patients through the foreclosure crisis.”

Whatever it’s called, the hospital’s new Acute Care Center promises to significantly contribute to San Francisco’s burdening health care services sector when it opens this Spring. Meanwhile, a proposed UCSF research facility at SFGH is in the planning stages, with the university soliciting public input on its design.