Last month, the Dogpatch Neighborhood Association (DNA) voted to endorse the siting of a Navigation Center at the end of 25th Street, just beyond the MUNI Metro East Maintenance Facility.  Two dozen DNA members voted in favor, six against, with three abstentions.

Before the vote several residents expressed concern about homeless behavior in the neighborhood, and wondered whether it was the right time for a Navigation Center to be sited in Dogpatch given ongoing development pressures.  Other community members thought the City had developed a solid implementation plan, and without an endorsement DNA’s ability to work collaboratively with municipal agencies on issues associated with the Center, as well as encampments, would be diminished. 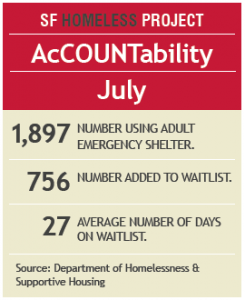 “More importantly it will cast a positive light on future interaction between the neighborhood and the Center,” said Mc Allen, DNA board member-at-large. “If we can accept the residents of the Center as neighbors, we will be on stronger footing to support their efforts to improve their lives. Rejecting the proposal was unlikely to block the project, but it may have undermined our ability to meaningfully engage the Center as anything other than opponents”

The lopsided vote was the result of the City working closely with DNA to craft an agreement that involves numerous municipal entities, including the San Francisco Department of Homeless Housing, Police Department, Department of Public Works and the Port.  The collaboration emerged after a rocky start, with the City unilaterally announcing that it was locating the Center on 24th Street, just west of Warm Water Cove, a proposed site that generated significant controversy.

Under the DNA agreement, police will patrol specific neighborhood areas, including spots surrounding the Navigation Center and ongoing municipal response to encampments in the community, with 72 hour response time, among other elements.  The City committed to maintaining the center for three years.

Decathlon, one of the world’s largest sporting goods retailers, opened an outlet
Over the past decade and a half Potrero Hill has become denser
Dogpatch, once thought of as Potrero Hill’s ugly stepsister, not long ago
A family that’s owned land for four generations at the southern tip
Pera, a Mediterranean restaurant, is celebrating ten years on 18th Street.  Irfan
Go to Top