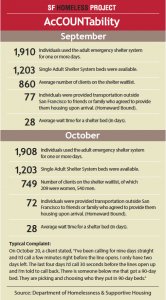 In the View’s October issue, as part of its election recommendations the paper stated that  “Rather than ad hoc solutions, or untethered mayoral promises about creating 10,000 new affordable units, San Francisco needs a comprehensive housing plan with measurable milestones and elected officials who are accountable to achieving these targets.”

Last month, San Francisco voters appeared to generally agree with this sentiment, rejecting four of eight housing-related ballot measures that reflected programmatic policy changes.  Among those that lost were Proposition P, which would’ve required competitive bidding on municipally-owned parcels, and Proposition U, to raise allowable income levels on affordable units.

The Siamese twin proposals, J and K, were separated by an electorate that was in no mood to increase the sales tax.  Under Proposition J – which passed – additional services would’ve been provided to the homeless, funded by Proposition K – which was roundly defeated – to fund those services through a sales tax hike.  Mayor Ed Lee is now scrambling to rebalance the City’s budget, which imprudently assumed $150 million in additional sales tax revenues.

Voters approved Proposition C, opening access to $35 million in financing for affordable housing by repurposing existing municipal bond resources.  Proposition Q, the tent ban, also passed, the most significant action San Francisco voters took related to homelessness, a strong reaction to a situation that a many believe has gotten out of control. Under the measure voters expect the City to move quickly to demolish encampments.  However, the collection of initiatives that won created no additional resources for the people to be removed under Proposition Q.