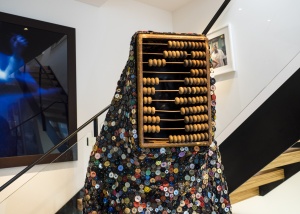 You never know what might be behind a front door or garden gate in Potrero Hill.  Indoor swimming pools, high-tech lighting arrays, lavish tropical gardens, elevators, dungeons, and hand-hewn homes can all be found on the other side of fences and exterior entryways.

Inside Jeff Dauber’s Hill residence is a dense collection of artworks, including video installations that stare back at viewers, and a sculpture that growls.  Dauber keeps a second Hill home that serves as a kind of guest quarters for a further eclectic array of post-modern art.  Some of the pieces are so vibrant they seem every bit as alive as a more typical house guest; perhaps livelier than some.

Dauber, a freshly retired Apple executive, is attracted to “works that make you think about things.”  Those things tend to be on the darker side.  Much of Dauber’s art collection is inspired by themes of death, war, racism, and environmental destruction, with religion making an entrance now and again.

A defiant African-American woman stares back at the viewer in an image made by Katy Grannan.  The piece was captured during the three years Grannan spent in the Central Valley, photographing in the hot midday sun.  In a painting by San Francisco artist Enrique Chagoya, Alice, standing on The Dodo, effortless keeps a fighter plane, piloted and co-piloted by Jesus, from attacking her with a single raised figure.  A sculpture by Patricia Piccinini, a deformed creature with texture like skin curls in on itself, as if it dropped out of the screen from Eraserhead.  Some of the pieces draw the viewer in. Others are repulsive. Many of them are both.

Dauber’s artworks speak for themselves, on painful topics that are often hidden by a consensual social compact that prefers that they remain unseen. “Race is one of those things that we don’t like to talk about,” said Dauber.  “Bullshit that we’re in a post-racial society.  The piece is successful because you’re uncomfortable…Art’s role is to provoke conversation.  It’s a shame that people treat it as an accessory.”

The collector’s preference for art that activates extends to the way in which some of his pieces were made.  “I love Nikki Lee,” Dauber said, as he pointed to an image in the Korean-American’s Projects series.  Lee adopted the dress, gestures, and postures of various subcultures – punks, swing dancers, Latinos, hip-hop musicians – introduced herself as an artist, and immersed herself into the group, capturing the results in snapshots.

Dauber’s own subculture was fostered growing up in New York, a member of a well-off Jewish family that valued art.  “It was the one activity we all could agree on:  visiting museums,” he said.  Dauber now has another reason to go to museums:  his pieces are on loan to several of them.

“My grandfather saw this one,” chuckled Dauber, as he stood in front of a microwave-sized model of synagogue clad in bullets and rifle pieces “and said ‘this is what you need to do to protect the Torah.’ Then he went over to” a similar piece representing a mosque “and said ‘because of that.’”

Dauber projects a fierce dedication to art’s disruptive potential.  His conversation – and his art collection – is leavened with the elements that fuel his passion:  anger at social injustices, a deep commitment to the role of the collector to support and deploy art as a kind of emotional and cerebral weapon, and an insistence, to paraphrase his former boss, the late Steve Jobs, on making a dent in the universe.  “What I like is not the first thing the sells,” he said.  “Americans have become intellectually lazy.  We tend to not look at things that bother us. Art education is gone.”

Dauber is also devoted to Potrero Hill.  “Once you move here, nobody every wants to leave.  Other neighborhoods are transitional, like Noe Valley.  Here we have a real place.”

Dauber, 48-years old, lives with his husband, Marc Levin, 59, a University of California academic specializing in government who retired last month.  He purchased the home he resides in from the estate of Blanche Thebom, a renowned operatic mezzo soprano and longtime Hill resident, who died in the house in 2010, at the age of 94.  He’d lived around the corner for almost 20 years.  Though he didn’t know Thebom, he had some of her recordings.  “As soon as I stepped into this house I said to Marc, do you want to live here, because if you do I’m going to buy it.”

Although he generally likes the way the community is evolving, he has one “big complaint,” he said.  “They’re putting a lot of things in without infrastructure.  A lot of the streets are parking lots” during commute times.  “16th Street is a super highway.  All ground floors” of new developments “should have commercial space.  We need another Good Life, a hardware store.  And we need to have a pharmacy.”

Dauber started to collect art in 1989, “as soon as I had enough income,” he said.  The works he purchases cost from $1,000 “and I try not to ever pay more than $100,000; it’s scary to pass different pricing milestones.”   He’s wealthy enough to continue to add to his already prodigious collection for the rest of his life.  He moves the placement of pieces roughly every six months, creating an environment in which different art objects are constantly expressing themselves, as if in conversation with one another.

“Life is to be lived, not floated by,” Dauber said.  In Dauber’s case, life is art.  Or perhaps it’s the other way around.