Thank you, The Potrero View, for publishing a mix of viewpoints on the Pier 70 redevelopment project. Potrero Hill residents deserve to know the degree to which their views will be obstructed, as well as the demands Pier 70 will place on already overtaxed infrastructure.

The articles create an opportunity to have a more informed dialogue. Following my February op-ed on Pier 70 project impacts, Forrest City representatives asked to meet, offering visual simulations, some of which were published in the March View. We met at the Potrero Library, and admired the spectacular Potrero vistas.

Former Mayor Art Agnos, the author of March’s op-ed, stated that he didn’t accept consulting fees from developers in San Francisco. I sincerely believe he didn’t accept monies, and recognize that he’s identifying the individuality of his political conscience. Financial gain is, of course, the primary objective of any developer. That’s why it’s important to check facts yourself.

One fact test is transparency. The Planning Department made a conscious decision to remove visual impacts from the project’s environmental impact review. The intentional removal of this safeguard is the first sign that accurate public information isn’t a City concern.

Another fact test is responsiveness to concerns. Forest City performed limited visual impact analyses after my op-ed, and declined to run additional simulations relevant to Hill residents. The cost of running visual simulations is negligible on a project of this magnitude; there’s no reason for Forrest City to decline doing so.

A final test of fact is the integrity of information provided by proponents. The simulation published with the March op-ed is from a nearly unimpacted vista; the new buildings are pictured as light gray structures. I erred by not asking Forest City if the simulations were performed using engineering models at planned ground elevations. One has to anticipate that visual impact studies are likely to be minimized by proponents. 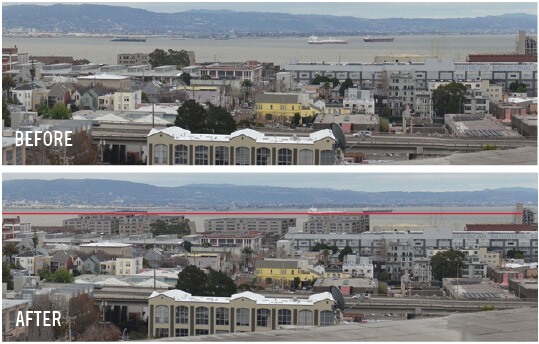 Viewing Pier 70 from near 22nd Street I’ve simulated impacts at a 155-foot view height using Photoshop. These simulations reference the steel structure’s height, and represent views that one might see from their homes. To be sure, my Photoshop studies aren’t as accurate as quality engineering simulations.

The Bay is severely obscured in my simulation. A large number of Potrero residents living at elevations between 130 and 170 feet will lose their Bay views; views from public areas will also be eliminated. A structure that works as a blockade effectively makes Bay views exclusive to those able to afford them, taking views from all of us.

While Forest City is proposing attractive aesthetic treatments, a project of this size will have the mass of a shopping megamall. The photo to the right, of a Berlin housing project, is just slighter taller, with similar massing and density, to proposed Pier 70 buildings. Buildings like this have already been erected along Mission Bay, though at two-thirds the height, and in pockets of Potrero. No amount of embellishment can hide megastructures.

The March op-ed opines that the City has been unable to address public transit and traffic congestion. The author advocates that impact fees and development taxes be used effectively to address these issues. This point is well taken. San Francisco was rated fourth worst in the globe out of 1,064 cites for traffic congestion in 2016.  Average annual traffic delays increased from 75 hours in 2015 to 82 hours in 2016.

Agnos effectively presided over San Francisco with a $1.2 billion budget, and led the City through Loma Prieta earthquake recovery. San Francisco now operates at a deficit, with a $9 billion budget. Former Mayor Agnos demolished one massive transit-inspired visual monstrosity and gave us back the Embarcadero waterfront. Imagine 90 foot structures next to the Ferry Building or directly in front of it. Typically, the Embarcadero waterfront has 400 foot setbacks for skyscrapers, as opposed to the planned 40 foot setbacks in the Pier 70 project.

Shouldn’t we expect Forrest City to run simulations for any potentially impacted resident? Don’t Hill residents deserve to know the degree to which their views will be obstructed? I sincerely hope my simulations overstate the impacts. Our waterfront parks should celebrate Bay views for all residents, instead of creating exclusive new views for a few. I hope that Forest City will support a more complete analysis.

The City doesn’t have to mandate new high-density housing projects to build new waterfront parks, public spaces and artist enclaves. There are other solutions, such as construction that respects historic heights and facades, and fixing transportation infrastructure before massively increasing vehicle traffic. We shouldn’t be forced to choose between high density housing projects or no new public spaces.

Editor, We’re writing to correct inaccurate comments made by Alison Heath in
Editor, We appreciate your thorough coverage of DM Development’s co-living project at
Editor, Regarding the loss of hilltop on Kansas Street – not Rhode
Editor, Please don’t make predictions. I picked up my copy of The
Editor, I declare tinted automobile windows the scourge of pedestrians, bicyclists, and
Go to Top