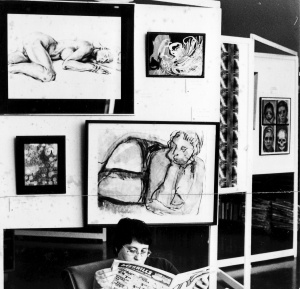 This year marks the 60th anniversary of the Potrero Hill Artists’ Exhibition, reputedly the oldest annual art show in San Francisco.  Various news accounts suggest that the show emerged sometime between 1951 and 1955 – most likely in the latter year – when artist Charles Griffin Farr heard that the City was planning to close the Potrero Branch Library. Farr rounded up other Hill artists to put on a show.  Many of the participants were refugees from too-pricey North Beach, where rents were as high as $99 a month!

“Get your ass down here,” he commanded his artist friends, including John Connolly, Henri Marie-Rose, Victor Arnautoff, Ruth Cravath, Bill La Grille, among others. Farr believed the show, sponsored by the library, would demonstrate to the City how important the library was to its community.  It must have worked; a renovated Branch Library remains central to the community.

In 1982 the show received a special commendation from the San Francisco Board of Supervisors: “In acknowledgement and recognition of the outstanding efforts by so many gifted artists, not only providing such a fine presentation, but serving as a neighborhood unifying activity and a valuable contribution to the arts community of San Francisco.”

Over the years the annual show, and its well-attended opening reception featuring live music, has become a highlight of the spring season. Artists who live and/or work on Potrero Hill offer a wide range of media, including photography, painting, sculpture, drawing, pottery, collage, fiberworks, and more. Nothing is for sale at the exhibition, though artists welcome follow-up inquiries from interested collectors.

Supporting organizations, who have contributed cash or in-kind donations, have included the Potrero Hill Women’s Club – which emerged in 1908, and disappeared in 2010 – Potrero Boosters, and Potrero Hill-Dogpatch Merchants’ Association, as well as local restaurants and stores.