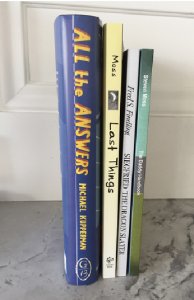 Those of us with siblings or close cousins are familiar with a game in which one family member recalls a childhood memory, only to have its veracity challenged by another:  it didn’t quite happen that way or didn’t actually occur at all.  Our recollection of past events is clouded by time, emotional (self-)manipulation, stories re-told, and photographic images.

Even fresh experiences are sifted through hermeneutic screens.  Individual interpretations of something that just happened often differ; each of us notice particular elements and assign them separate meanings.  Memory, particularly collective, is a tricky thing, more akin to a lump of never completely hardened clay than data etched into a hard drive.

The process of stitching together what happened moments, or decades, ago is made extra difficult when one or more of the principals is no longer around, in body or mind.  Such is the case with two recently-published graphic novels that tell tales about members of my own family.  Last Things, by my sister, Marissa Moss, details the death of her beloved husband, the art historian Harvey Stahl.  In All the Answers, my cousin, Michael Kupperman, attempts to journey to the mind of his father, my mother’s only sibling, Joel Kupperman, a famous child radio personality mid-century last, only to be rebuffed by Joel’s emotional distance and early-onset dementia.

I’m a player in both novels, appearing in my sister’s book; outside the frame in my cousin’s.  Which is to say, I have my own memories, interpretations, and emotional reactions to what happened with my brother-in-law and uncle.  These aren’t nearly as intimate as a wife’s or a son’s; akin to being a walk-on character or member of the chorus in the drama’s cast. Still, it’s notable to be an insider of deeply personal tales told widely to the world, with no actual voice in the telling.  While reading each novel I felt as if I was hovering over scenes, having an out-of-body experience in which my actions and understandings, while familiar, were controlled or interpreted by someone else.

Lest you think I’m critical of my relatives, the writers, for producing their books, I’m not.  It’s Marissa’s and Michael’s calling to tell and draw stories; she’s an award-winning children’s book author/illustrator, he’s a noted cartoonist.  Even without their professional chops I’ve done the same thing, with my quite lively daughter at the center of the story, in The Daddy Handbook, an illustrated set of anecdotes about being a father. In writing that book I wanted to adhere to the truth. My daughter, wife, and others can judge whether or not I fully succeeded. No doubt, by vaunt of being trapped in my own perspective, I didn’t.

Although Last Things and All the Answers attempt to record and convey history, both books read like a kind of extended prayer. Their texture is Biblical, stories of exodus from innocence, of painful journeys that, while not redemptive, reflect what it is to be human.  They are mournful wails; pained, angry, cries shouted out across chasms of hurt, that echo against each reader’s own injuries. The volumes are about the meaningless, horrific, loss of a loved one; coming to terms with never, ever, experiencing what it’s like to be fully loved and accepted as a child; recognizing, in the deepest part of one’s self, that our nightmares triumphed over our dreams of what a mother, father, husband, or even the act of death and disappearance should be.

The books, along with another for which I’m an insider, my father-in-law, Fred Findling’s, self-published Siegfried The Dragon Slayer, are also simple declarations of Hineni. Here I am.  Find me, so I can find you.  Fred’s book details his experience fleeing Nazi Germany as a child – his father shot into a mass pit; his mother murdered at Auschwitz – and emerging as a successful lawyer and deeply loved family man.  Fred’s story is far closer to one of redemption than Marissa’s or Michael’s, but he recently told me that a final chapter is missing, one that conveys his intense rage at being violently stripped of his family, place, and sense of security.  In that way his account, fully told, joins the others in shouting the message that terrible things happen to good people.  Get used to it.

I would’ve told Marissa’s, Michael’s, and Fred’s stories differently, had it been my place to tell them. I can still do that, in conversation with them, others, myself.  That’s what family memory games teach us. Our tales only come alive when we tell them to one another.  Once animated they’re no long ours, if they ever were, touched and interpreted multiple times.  When we’re lucky they become full-throated choruses, sang, in clusters of individuals across great distances, with different tones and pleasantly contrasting rhythms, in a tune that at its peak mixes into a prayer about one thing:  each of us, alone and especially together, matter.

Sad to say, we’ve drifted into a world in which this editor
In Mendocino County, 523 acres of rugged forest is studded with the
I had a vision, or perhaps it was a dream, of my
Last month Elizabeth Holmes was found guilty of defrauding investors out of
The Nazis discovered the family hiding in France and put them on
Go to Top