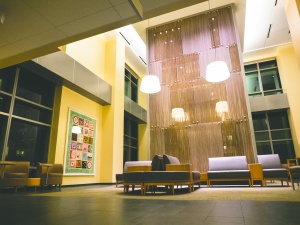 Just as the huge lettering on the glass tower at the end of 16th Street had promised for months, the University of California San Francisco-Mission Bay’s newest Medical Center opened to the public on February 1, 2015.

The $1.5 billion project includes hospitals which provide specialized services to children – the Benioff Children’s Hospital – and women, as well as cancer treatments.   The facility took 10 years of planning and five years of construction at its 16th and Mariposa streets site, which borders Third Street and is across from the UCSF-Mission Bay biomedical research campus.

Early Super Bowl Sunday, 40 ambulances filled with health care professionals and patients caravanned from UCSF’s Parnassus and Mount Zion campuses to the new Mission Bay location. About 200 patients were shuttled every four minutes starting at 7 a.m., settling into their new hospital rooms well before game time. The children’s hospital at the Parnassus campus is now being used to accommodate other health care services.

Days before the public opening and patient transition, a ceremony was held at the Benioff Children’s Hospital lobby to celebrate the new facilities. Benefactors Marc and Lynne Benioff, of Salesforce fame, attended, as did San Francisco Mayor Ed Lee, Fire Chief Joanne Hayes-White, transportation director Ed Reiskin and San Francisco Supervisor Jane Kim.  Investor Ron Conway, after whom the Ron Conway Family Gateway Medical Building for outpatient services is named, was also present.  Conway donated $40 million to the building, on top of which is a helipad.

Lee called the opening the start of a new Gold Rush. He said the state-of-the-art facilities have drawn the best talent to San Fran-cisco, which in turn has given “op-portunities to save lives and improve lives of women and children.” He harkened back to his days as Department of Public Works director, when Mission Bay consisted mostly of an under-utilized railroad depot. Now new infrastructure in the area, he argued, has enticed private investment, biotechnology and pharmaceutical companies, as well as stem cell researchers. Lee said he had faith that if UCSF had the dream 10 years ago to build the complex, “they will solve the serious cancer problems of today.”

Following an emotional speech by a mother of a former UCSF patient, a 19-year-old recovering cancer patient rang a cable car bell donated by the Municipal Transpor-tation Agency. According to UCSF Medical Center chief executive officer Mark Laret, having a ribbon-cutting didn’t seem to be in keeping with San Francisco’s style, while use of the cable car instrument followed the tradition of ringing a bell or sounding a gong after radiation treatment is complete.

During a tour of the Benioff Children’s Hospital pediatrician Dr. Seth Bokser touted the communication systems installed in each hospital room as part of a plan to cater to “patient engagement technology.” In one of the spacious single rooms with a view of Twin Peaks, Potrero Hill and the freeways running alongside Mission Bay, Bokser showed a bed-side tablet, a large screen display on the wall and a personalized system equipped with social media apps, photographs and notes and medical information, all within arm’s reach. “We want patients to have the experience that this is a cockpit” and they can co-pilot their experience, he said. The doctor called the technology tools for empowerment, education and entertainment.

With the new technology comes a learning curve and the need to train doctors and other medical professionals.  “Technology is used to shrink the health literacy gap,” when it comes to treating patients, Bokser said. Most families are excited to have access to more medical files and doctor information. Technology is also changing mentalities. Bokser said it used to be “you are a patient in my hospital,” while now it’s “I’m a doctor in your room.” Bokser noted that all the screens, gadgets and devices can be turned off to create a quiet environment. “It’s technology when you want it,” he said.

The facility includes a staff of 25 robots, which are the kids’ favorite part of the new site, Bokser said. The robot couriers are programmed to transport equipment, linens, pills and medicine. The fleet, which took roughly 18 months to set up with sensors and biometrics, cost about $6 million.  It’s expected to pay for itself in labor savings within three years.

The health care robots have been deployed in 140 hospitals worldwide; UCSF has the largest population. Once the robots speak – “please place finger” or “drawer open” – they become more life-like. The technology is used for efficiency and fun, Bokser said. A naming contest is in the works for the seven robots in the children’s wing.

Between the three hospitals, which are all connected, there are 289 beds and 20 operating rooms. Hospital officials anticipate more than 2,600 births in the coming year, along with nearly 10,000 surgeries for in- and outpatients. A 10-level parking structure built adjacent to the medical center offers 627 spaces; more than 420 spots are available on street level.

Next month: learn about art at the medical center, and how UCSF is using creativity to treat some of its youngest patients.