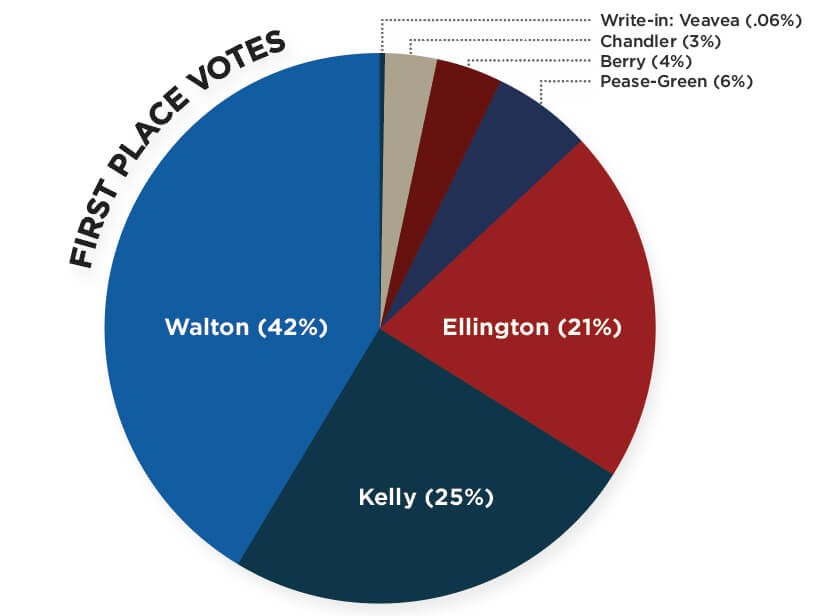 Shamann Walton was elected to the District 10 Board of Supervisors seat last month. He’ll be sworn into office on January 1, 2019. As of election data available in mid-November, Walton received 8,891, or 42 percent, of first place votes cast in the District.

“I’m definitely excited and ready to get to work,” said Walton. “On election night, we were elated. I want to address affordable housing, homelessness, community safety, and transportation.”

Walton said he also wants to make jobs created by ongoing growth on the Southside accessible to District 10 residents, stop street dumping, and spark a dialogue on how parking regulation changes are affecting the community.

“I plan to address pollution at the Hunters Point Shipyard by bringing in academia to do the testing. They do not have as many conflicts as private contractors. We also need to pick the right environmental remediation companies to do the clean-up,” said Walton.

Walton plans to stop the San Francisco Municipal Transportation Agency from engaging in “switchbacks,” a practice in which Muni redirects a vehicle on a line to another point in the rail system in response to shifting demands. Switchbacks can force passengers off vehicles and onto the street to wait for another car to finish the remainder of their route.

“Right now, the T-Muni line switches back and doesn’t finish. When you switchback you ignore the needs of people of color. It’s unfair and unjust. I want to bring a dedicated line like the 15 down Third Street,” said Walton.

Walton will leave his post as executive director of Young Community Developers (YCD), a Bayview-Hunters Point-based nonprofit that offers job training, career placement, and affordable housing to Southside residents. Walton hopes that Dion-Jay Brookter, the organization’s deputy director, will succeed him after he’s sworn in as D10 Supervisor.

“When you look at the 2018 midterms, you can see that it’s more and more important that people get out and vote,” said Walton. “I will work with the Democratic Party on registering voters at our neighborhood events, including Sunday Streets in Bayview and Dogpatch, BayviewLIVE, Butchertown Jazz Festival, and the Farmers Markets in Visitacion Valley.”

Despite receiving less than half the first-place votes cast, Walton carried the election through ranked choice voting (RCV), a system in which voters can select up to three candidates in order of preference. Votes for candidates receiving the least support are redistributed based on constituents’ second and third choices. On the seventh round of RCV, Walton’s numbers increased to 12,063, 63 percent, cinching him the election.

“Supervisor Walton is clearly the closest candidate to the powers that be and that led to his victory,” said Kelly, who ran for the District 10 seat twice previously. “But the District 10 Supervisor’s inbox is overflowing with issues that can’t or won’t be solved by interests with money and power. Supervisor Walton’s choices and the District’s future will often come down to how we all navigate that dilemma.”

According to Kelly, in a few years District 10 will see a wave of development and potential gentrification.  “We’ve seen firsthand, from Mission Bay to Third Street to the Shipyard and Schlage Lock, what happens when planning and development is done badly. It is up to Supervisor Walton to decide if he wants to continue that disappointing history or not,” said Kelly, who indicated that he’s not considering a future run. “I’m looking forward to supporting others who want to build working-class power and break down systemic racism in the neighborhoods of District 10.”

Pease-Greene, who ran for Supervisor for the first time in 2018, quickly announced that she’ll campaign again in 2022.  “Right now, I am going to continue helping the Community Awareness Resources Entity, a Potrero Hill resident nonprofit that builds healthy communities with concern for youth and young adults, with our fifth annual community Thanksgiving dinner and Christmas and third annual Christmas toy giveaway. I will ask Walton to follow through with paying attention to Potrero Hill and Sunnydale, which tend not to receive adequate resources after resources have been distributed to Bayview-Hunters Point,” said Pease-Greene.

Veavea, also a first-time would-be politician, said he’s taking a rest from politics. “I received hate mail related to my sexual orientation and ethnicity. The great thing about my run is that I inspired so many young people of color,” said Veavea. He plans to start a LGBT support group in Visitacion Valley and continue to advocate for Pacific Island communities in the District.

Outgoing District 10 Supervisor Malia Cohen, running as a Democrat, won her race for the State Board of Equalization, District 2, with 281,075, 86 percent, of the votes. Recently criticized by state legislators for being incompetent and irrelevant, the Board of Equalization oversees collection of more than 30 state taxes, including property, sales and use, cannabis, hazardous waste, and jet fuel.

Walton will leave his position on the San Francisco Board of Education at the end of the year. His seat, and two others, will be filled by Alison Collins, district liaison for the Chief Academic Officer of Oakland Unified School District, who received 119,365, 15 percent, of the vote; Gabriela López, a fourth-grade bilingual teacher at Leonard Flynn Elementary School, who garnered 108,103, 14 percent, of the vote; and Faauuga Moliga, who secured 104,565, 13 percent of votes cast. Prior to the election, Mayor London Breed appointed Moliga to one of the seats. Faauga works for the San Francisco Department of Public Health Community Wellness Program, which helps develop health centers as part of the HOPE-SF initiative in Potrero Hill, Hunters View, Alice Griffith, and Sunnydale.

Polling places were scattered throughout the District, including at the Lou Spadia Clubhouse at Jackson Park, California College of the Arts’ student lounge, and Daniel Webster Elementary School’s flex room.

Measure A, the Embarcadero seawall safety earthquake bond, passed with 278,138, 83 percent, of the vote. The measure authorizes the City to issue up to $245 million in bonds at an estimated tax rate of $0.013 per $100 of assessed value to fund repairs and improvements to the Embarcadero Seawall, as well as associated infrastructure and utilities for earthquake and flood safety. The seawall runs from Fisherman’s Wharf to China Basin. The bond will generate up to $40 million a year.

Measure C, additional business taxes to fund homeless services, passed with 207,235, 61 percent, of the vote. The measure will apply a 0.175 to 0.69 percent tax on gross receipts for businesses with more than $50 million in gross annual receipts. Alternatively, the measure could apply a 1.5 percent of payroll expense tax, levied on enterprises with more than $1 billion in gross annual receipts, administrative offices in San Francisco, and at least 1,000 employees nationwide.

Measure C is expected to raise between $250 and $300 million a year, doubling municipal spending on homeless services and housing. Salesforce chief executive officer, Marc Benioff, contributed more than $7 million to the “Yes on Prop C” campaign. Mayor London Breed, Twitter and Square CEO Jack Dorsey, and Stripe CEO and Zynga founder Mark Pincus opposed the measure. Lyft, which has a hub at 2300 26th Street, donated at least $100,000 to the “No on Prop C” campaign.  Since the measure didn’t secure a two-thirds vote, which some analysts believe is required under state law, it may ultimately be tested in the courts.

Measure D, additional tax on cannabis businesses, passed with 219,525, 66 percent, of the vote. The measure places a one to five percent tax on cannabis businesses with gross receipts greater than $500,000, with exemptions for retail sales of medical marijuana. It also expands the cannabis business tax to enterprises not physically located in San Francisco. The tax is expected to generate between $2 million and $4 million in 2019, and from $7 million to $16 million annually beginning in 2021, funds that’ll be directed to the City’s general fund.

According to the California Secretary of State, Proposition 10, which would’ve removed restrictions on local rent control laws, was rejected by 5,773,774, 61 percent, of California voters. The proposition would’ve repealed the 1995 Costa-Hawkins Rental Housing Act.  A majority of San Francisco voters supported Proposition 10, with 183,161, 53 percent, voting “yes.”

“I really wish we had had the opportunity to show the City what rent control looks like,” said Walton. “We have the biggest wealth gap in the state. There was a dishonest attack on Prop. 10. That is part of why those who opposed it prevailed.”

Data from the City’s Department of Elections and the State of California are preliminary; both entities will release final results by December 7, 2018.

My Gym’s Dogpatch location, which offered fitness classes for children from six
Proposals to relocate the 115,000 square foot San Francisco Flower Mart to
Al Giddings first opened Bamboo Reef, a scuba diving shop located at
Earlier this fall, the San Francisco Board of Education unanimously denied the
Townsend Street from Third to Eighth streets – an area encompassing the
Go to Top