Elizabeth Boileau died on October 31 at her Potrero Hill home with her family and friends at her side. She’s survived by her beloved husband of 42 years, Robert, their sons, Patrick and Donovan, her brother, “Chip,” and sister, Diane. Elizabeth was the first daughter of her deceased parents, Dale and Celia.

In addition to devotion to her family, Elizabeth was known for her love of cooking and gardening, loyalty to the San Francisco Giants, generosity of spirit and commitment to community service. She worked at California Advocates for Nursing Home Reform (CANHR) for many years as an accountant and long-term care advocate, and was a member of the Board of CANHR’s Legal Referral Service. Her service to the Boy Scouts – Troop 88 and the San Francisco Bay Area Council – was notable. She joined the Scout’s service organization, Order of the Arrow, was advanced to Vigil membership in Achewan Nimat, and received the Council’s Silver Beaver Award for combined service to Scouting and community. When she passed, Elizabeth was a member of the Council’s Camping Committee overseeing three camps. Elizabeth led an annual summer camp-in-a-camp at Camp Royeneh in Sonoma County for Eagle Scout candidates.

St. Gregory’s Episcopal Church was the venue for much of Elizabeth’s service, from its early days in the chapel at Trinity Episcopal Church in 1978, through construction of its own church on Potrero Hill in 1995, including cooking for countless special events, sewing costumes for the children’s Christmas Pageant, and serving as part of the governing body, the Vestry. She loved the community and the idea of a relevant modern church.

St. Gregory’s Free Pantry and the San Francisco-Marin Food Bank were other avenues of service. She started off buying hundred weights of beans and rice from commercial distributors, stored in her family’s garage, to be given away to the needy. Now the Pantry buys a ton of food from the Food Bank, including fruits and vegetables, which’re distributed at the weekly Food Pantry at the church. Elizabeth served as buyer and a member of the Pantry’s Board.

Another major focus of Elizabeth’s service was to San Francisco’s Food Runners, as a volunteer and vice president of its Board of Directors. Food Runners has a pool of volunteers and a refrigerated truck that pickup mostly prepared food which’d otherwise become surplus, delivering it to homeless shelters.

In lieu of flowers, donations in Elizabeth’s honor can be made to: St. Gregory’s of Nyssa Episcopal Church, St. Gregory’s Food Pantry, www.saintgregorys.org, or to Food Runners, www.foodrunners.org. 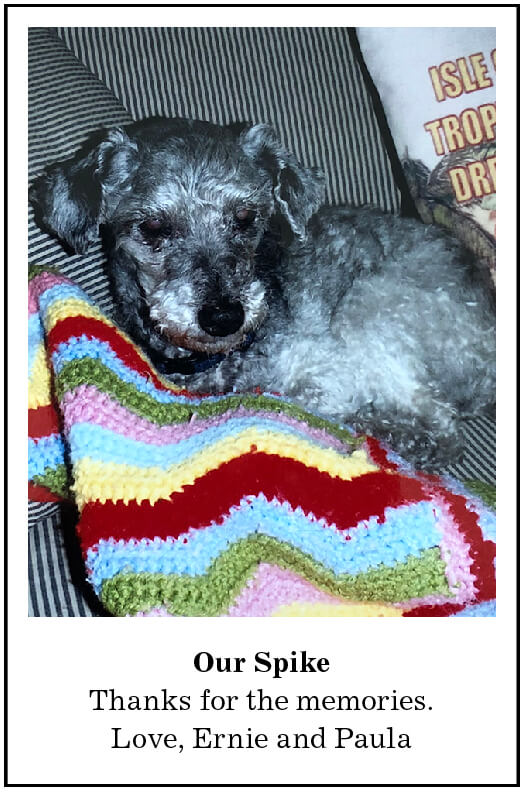 Long-time Potrero Hill activist, Dick Millet, died on November 10 at the age of 89.

Born in Central America, Dick moved to the Hill in 1969, restoring his Connecticut Street building himself and remaining there until moving to a retirement community in his final years.  He served as Potrero Boosters Neighborhood Association president for nearly a decade, overseeing its division into separate advocacy groups for residents and businesses under the Potrero Hill Association of Merchants and Businesses.

Dick received his bachelors of arts in architecture from the University of California, Berkeley in 1960. He worked as an architecture and planning professional, using his understanding of the Planning Code and residential zoning to counsel his neighbors through negotiations on remodels and discretionary reviews, and championing livability and community interests.  He was a Korean War veteran and an avid tap dancer.

Dick remained active with the Boosters after stepping down as president, serving as the organization’s advocacy chair, writing for “The Potrero Community Voice,” and hosting executive committee meetings in his home.  He attended membership meetings even after he’d moved out of the neighborhood.  He was an active member of San Francisco Tomorrow and the Potrero League of Active Neighbors, and served in various capacities on the Mission Bay Citizens Advisory Committee, University of California, San Francisco-Mission Bay Citizens Advisory Group, and as treasurer for the Potrero Hill Democratic Club.

The San Francisco Board of Supervisors issued a proclamation naming May 29, 2001 “Richard T. Millet Day,” citing him as a “community expert and historian on land use and planning issues,” who had, “demonstrated commendable civic mindedness in his continued efforts as a strong advocate of planned growth for his neighborhood while preserving its unique community.” That same year, Dick was awarded the Coalition for San Francisco Neighborhoods’ 2000-2001 Neighborhood Achievement Award for the Most Outstanding Neighborhood Association on behalf of the Potrero Boosters.