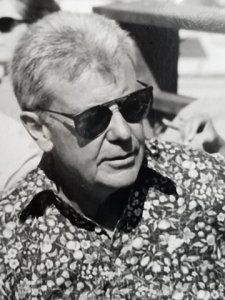 Michael Denman died on December 12, 2018 of heart failure. He was surrounded by family and friends, under the care of California Pacific Hospital staff. He’s survived by his brother, Peter Denman, and several nieces and nephews. Mike was the second son of his deceased parents, MacDonald Simpson Denman and Clara Van Ness Denman. His great-great-grandfather, James Van Ness, was San Francisco’s seventh mayor.

Born in 1929 in Portland, Oregon, Mike later moved to Seattle. At the time, his father was working to create opportunities in the Pacific Northwest for the family business, Crown Zellerbach, a San Francisco-based pulp and paper conglomerate.

Mike was a 1948 graduate of the Lakeside School, an independent Seattle school for fifth to twelfth grades. He attended the University of Washington, majoring in business. In 1953, Mike joined the United States Air Force. For much of his three years in the military Mike served as a B-47 pilot in the Strategic Air Command led by General Curtis LeMay. His service took him to Arizona, where he developed a love for Southwestern and indigenous art. Mike became an avid collector of paintings, weavings, and other works.

In 1956, Mike moved to San Francisco, joining his family, which had returned to the Bay Area in 1950. He attached himself to Hill & Company Real Estate, working as a realtor until 1983. When he left Hill & Company, he signed a lease with The Port of San Francisco for the area at the bottom of Mariposa Street that’d become The Ramp. When Mike first saw the property, it was a bait shop with a hot dog machine and bar. Mike transformed the business, which originally opened in 1950, by building a kitchen and outdoor bar. In recent years, he added heated tents, creating an ambiance that attracted a wide variety of customers.

Mike’s first partner in The Ramp was Joseph Costello, founder of Hill & Company. In 1987, Mike chose Joan Robins to manage the establishment. Over the years he built The Ramp and San Francisco Boatworks into neighborhood institutions.

“Mike attributed the great success of the restaurant in large part to Joan Robins, and the success of the Boatworks to Craig Page and Rick Dawson. Where many saw a mess in the Dogpatch, Mike saw an opportunity and a future. Mike had always had an entrepreneurial and adventuresome spirit,” said Peter Denman.

According to Robins The Ramp attracted people from the boatyard, as well as from Downtown. “People who worked at the District Attorney’s office and the San Francisco Chronicle. Donald White often set his column there. Mike made sure that the restaurant was unassuming, comfortable, and funky,” she said.

Robins said the first time she saw Mike she was approaching the patio to work a shift. “(I) noticed a tall gentleman sweeping the patio. That turned out to be Mike, the owner, caring for the patio as though it were his front yard,” she said. “He created a place and a home that is loved by so many of our guests, current employees and past employees. It is Mike’s love and character that created and kept The Ramp as an iconic symbol of old San Francisco. Every photo, light, old real wooden table, chair, and plant were placed with care by Mike so as to create a homey feel. His character is what the Ramp is really about…an honest, homey spot welcoming to a diverse mix of folks, everyone is welcome.”

According to J.R. Eppler, Potrero Boosters president, The Ramp provided access to the waterfront at a time when the area was mostly industrial.  “He hosted community and political events in a tradition we hope will continue,” said Eppler, who recalled a 2014 event at the restaurant to support Proposition B, an initiative that mandated voter approval for waterfront construction that exceeded height limits.

Mike started a tradition of live music at The Ramp. The series began with jazz on Sundays, later blossoming into Brazilian and Cuban music. In recent years, The Ramp became a home for salsa music and dance on Saturdays and Latin music on Sundays. In 2013, The Ramp appeared in the Woody Allen movie, Blue Jasmine. Mike welcomed dogs and children to the establishment.

Mike stayed in close contact with the Port to maintain the restaurant’s lease. Although it wasn’t always an easy relationship, Mike won the respect of Port staff.

“My relationship with Mike started by helping him be in compliance with his Bay Conservation and Development Commission permit…He was such a nice person; we worked together to try to resolve issues. Over the years I became friends with him. My family frequented the restaurant and my daughter loved to play in the public access area to the south,” said David Beaupre, Port of San Francisco senior waterfront planner.

“Mike’s passing is a big loss for the waterfront and he was a true gentleman,” said Jeff Bauer, Port of San Francisco leasing manager.

Topher Delaney, an artist who lives and works across the street from The Ramp, said she was friends with Mike for the past 16 years.  “He was fearless, kind, and good at resolving issues between people. He was the mayor of that portion of the land,” said Delaney.

Delaney said The Ramp was a “wonderful space that celebrates connections to the water…four years ago, the Port had an idea they’d (lease the rights to) a high-rise condo development in The Ramp’s parking lot. They were promoting a park on the east side of Illinois, but also a complex that would block access. (Mike and I) stood on the side of public access to the water. I built an expensive model and started a blog about this. The Port eventually backed off. That was the cementing of our relationship,” said Delaney.

Arvind Patel, who became Mike’s partner in The Ramp and San Francisco Boatworks in 1991, said Mike was an iconic personality on the waterfront. “He was very caring, supportive, and elegant,” said Patel, who will now take over operations of both businesses.

Mike’s family and friends observed his passing with a memorial service at The Ramp on December 19. As Mike was a lifelong fly fisherman who loved the rivers and streams of the West, his friends and family will gather in the spring to take Mike’s ashes to his favorite fishing spot, the Upper Umpqua River in southern Oregon.

“We will…travel in a caravan to join with family members from Canada,” said Peter Denman.

Peter Denman said he’ll remember Mike as a loving and gentle person who was always open and accessible.  “Mike liked keeping things simple as much as he could. Friends were everything for him. He was the glue that kept people and places like The Ramp together,” he said.

Robins said Mike was highly intelligent, forgiving, and thoughtful.  “(He was) understanding of every human’s plight, even those (who) may have been detrimental to his business. He kept his sense of humor, joking with the caregivers even when in pain. He would help house those needing help and give a dollar or work to a friend in need,” she said.

Robins said that Mike became a father figure for her kids. “His favorite line was, “It’s part of growing up. Don’t worry, you’ll get there,”” she said.

In lieu of flowers “I encourage donors to think of the needs of people without shelter in the City,” said Peter Denman.