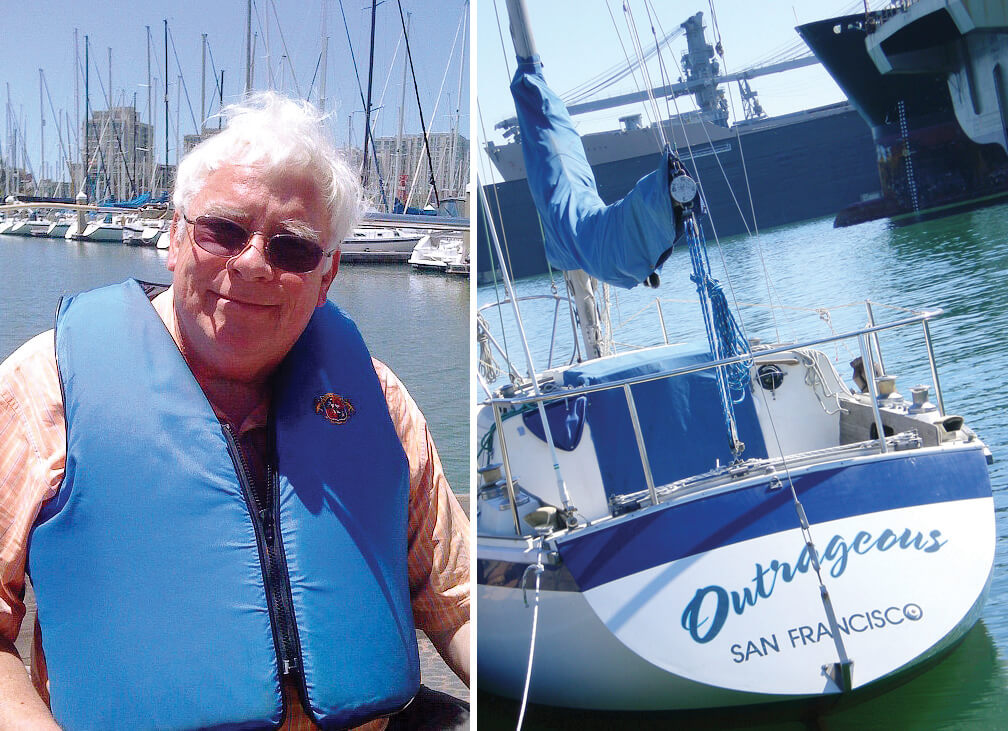 Longtime Dogpatch resident and community advocate, Joe Boss, died at his home from health complications on December 19, 2017. He was 72.

Boss was known for his insistent engagement in Southside issues and organizations, as well as his work as a consultant for developers.  He was a member of the Central Waterfront Port Advisory Group, San Francisco Port Advisory Group, the Eastern Neighborhood Citizens Advisory Committee, and the Potrero Boosters’ executive committee. He, along with his wife, Janet Carpinelli, helped create the Dogpatch Historic District.

For more than 30 years, Boss consistently attended meetings focusing on land use, including the University of California, San Francisco’s recent public gatherings regarding the construction of student housing. He was well-known for his years-long efforts to transform Esprit’s private lot at 19th Street and Minnesota Street into a public park.  And he helped elect District 10 Supervisor Sophie Maxwell in 2000.

Boss was the son of Marie and the late Louis Boss, and the brother of Judy, Nicki, and the late Mike Boss. Boss attended the College of Marin in the early-1960s. He married at the age of 20, and shortly thereafter had two children. For the next 20 years, he worked for the Reneson Hotel Group, which managed Best Western hotels in Marin and San Francisco counties.

Boss started out with the group as a maintenance engineer. According to Carpinelli, he was “very good at anything mechanical or electrical.” Boss eventually became the company’s chief executive officer. In the late-1990s and early-2000s, Boss worked as a strategist, developer, and consultant for a large golf course in Calaveras County, as well as for development projects in Danville and other parts of the San Francisco Bay Area.

Boss and Carpinelli bought a house on the 900 block of Minnesota Street, “pre-Dogpatch,” in 1983. “It was a completely original house. We worked on it and did all the electrical, plumbing, and carpentry. Since we loved our house and our neighborhood, we put a lot of work into the property,” said Carpinelli.

The couple also owned a sailboat, “The Outrageous,” that “passed through the ownership of many friends through the years until we berthed it at South Beach Harbor,” according to Carpinelli. John deCastro, a longtime Potrero Boosters member, became a partner in the boat for several years.

“Joe was one of the founding members of the South Beach Yacht Club. In the 1980s, he helped build the original clubhouse and deck. When the San Francisco Giants came to the area, Joe was instrumental in making sure the owners could have easy access to the harbor parking lot at any time,” said Carpinelli.

“Joe was a wonderful man,” said Corinne Woods, chair of the Mission Bay Citizens Advisory Committee. “He was interested in and concerned with other people and his community. He was always willing to share his deep knowledge, and remind us to keep our sense of humor in working with the City. Joe was instrumental in helping Dogpatch and Potrero respond professionally to the challenges of the massive changes of the past 10 years,”

“Joe was a neighborhood treasure who cared deeply about civic life in San Francisco, specifically Potrero Hill and Dogpatch,” said Dennis Herrera, City Attorney. “His commitment, his civic pride, and his sense of humor will be deeply missed. There’s not a thing that was going on in Dogpatch or Potrero Hill that Joe didn’t have an opinion about or a view on. The neighborhoods are better off for his involvement,”.

“I am so sad to learn of his passing. I met Joe when I first came to work for the City in 2000. He and I both were on the Potrero Power Plant Task Force. He was a staunch community activist (who) wanted a positive future for Potrero and for the waterfront.  He was an avid sailor at our own South Beach Harbor and was a real friend of District 10. I believe that he was a volunteer for Supervisor Sophie Maxwell. We’ve lost a dear friend to the waterfront and the City,” said Elaine Forbes, director of the Port of San Francisco.

“Joe was an advocate for the waterfront and the Port. Joe was a pragmatist. His engagement (with) the Potrero Power Plant Task Force and the Eastern Neighborhood Task Force focused on shaping projects that allowed change. (The projects) delivered on environmental improvements and community objectives, including protecting the shipyard and maritime needs and the historic resources that give Dogpatch its identity. He was a consistent voice of support in the Port’s efforts to plan for and develop the Pier 70 Master Plan and SWL 337 RFP, and the project improvements that now are underway by Forest City, Orton Development and the S.F. Giants.  I will miss his funny, irascible and charming presence,” said Diane Oshima, director of planning and environment, Port of San Francisco.

“I think Joe was very thoughtful. He had angles sometimes people hadn’t talked about. He was relentless. He worked so hard on keeping communities like Bayview together. It’s because of people like Joe that the District is cohesive. Joe had a vision of the whole, the District and the City. I think he was one of my favorite people. He had this way of disarming, with laughter. Personally, I feel a loss, especially right now in District 10. Joe’s voice, Joe’s perspective is missing,” said Maxwell, former supervisor of District 10, who served three terms between January 2001 and January 2011.

“Joe was a caring man who really worked to support his community. In all that he did, he was a man of integrity and conscience. He tried to compensate and make whole the community from the negative effects of what development was doing. He was not fighting for his own ends or his own enrichment. He was fighting for the well-being of the community. He was a real asset to our community. Joe also worked to increase the involvement of merchants. He played an important role in bringing the Dogpatch perspective to the Potrero Dogpatch Merchants Association,”” said Philip de Andrade, co-owner of Goat Hill Pizza.

“Joe definitely played a very active role in neighborhood issues for many, many years. Joe had a quick wit and sarcastic sense of humor. He was never afraid to say things that most people were thinking, but wouldn’t say aloud,” said Susan Eslick, Green Benefits District board member and Dogpatch Neighborhood Association vice president.

“Joe really had a very big heart. He cared very deeply about his neighbors and the neighborhood. He would go to bat for his neighbors. He knew the people in City Hall and could point you in the right direction. He often did that without any fanfare, rather quietly,” said Keith Goldstein, past president of the Potrero Dogpatch Merchants Association.

“Joe was very involved in development and infrastructure matters. He had a very broad view of how the neighborhood connected to Mission Bay and Bayview. He had a very wry sense of humor, and was able to bring that into negotiations and tough conversations. He had a line he’d like to say, “What a concept!” about something that should be, but to the speaker wasn’t, obvious,” said J.R. Eppler, Potrero Boosters president.

“I met Joe on Sophie Maxwell’s campaign in 2000. He was a hugely important figure in neighborhood politics and development. He knew and understood developers, but was on the neighborhood’s side. He was always really clear with developers that they could do more than what they were doing. Joe was brash and humorous. He was always trying to figure out where the agreement, the deal was going to be. He was very direct. He was always personally generous with his time, willing to hear what someone had to say and talk it through,” said Tony Kelly, Potrero Hill Democratic Club president and a candidate for District 10 supervisor.

“Joe has been a friend, an advocate, a critic, and a straight-up associate of the Nabe. When he worked as a consultant for developers, he did what I call ‘thoughtful development.’ Most of Joe’s work has been advocating for and strengthening the community,” said Edward Hatter, Potrero Hill Neighborhood House executive director.

“With regard to the Corovan project, he introduced the developers to me,” Hatter continued. “He opened that line of communication between the developers and the Nabe. He would often make those introductions where we could make our own “ask.” He would give us parameters for the ask and work alongside us to better understand the revitalization of public housing. We have a very poor community and a very affluent community. Joe engaged in efforts like the movie projects that we premiered with Bridge Housing to show outdoor movies. These helped bring both sides of the Hill together. Also, Joe was just fun. He was so quick-witted. He could come in and sometimes be a little off the cuff. I kind of liked to be around him at a meeting. I’d go and sit next to Joe because he would make the meeting fun. People at community meetings were often very serious, very adamant about everything. Joe could crack a joke and make it go down easier. I miss him. He had that ‘spoonful of sugar,’”

“We both enjoyed making the neighborhood a better place for everybody. We didn’t always agree on everything. Sometimes I was more liberal, but Joe’s view was that really working with the neighborhood helped him see how people in the neighborhood felt. He was very smart. He’d get into the nitty gritty of things. He was very analytical about things, the way money should be spent. He had very strong opinions. I liked his smart, quick sense of humor. He was well-rounded, interested in food, wine, art, good conversation, and politics, of course,” said Carpinelli.

Carpinelli may hold a memorial service for Boss this spring. She asked that donations be made in his name to the Bay Area Association of Disabled Sailors.  In addition to Carpinelli, he’s survived by his two children, Thomas Boss and Christina del Villar, granddaughter, Beatrice, and many nieces and nephews.