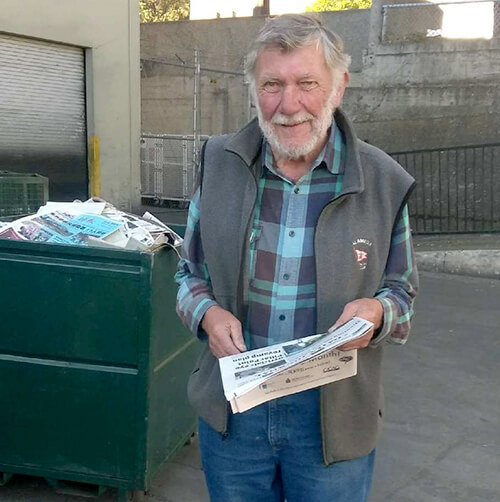 Peter Tangermann worked until the week before he died at the age of 75. For decades he managed delivery operations and circulation for publications throughout the Bay Area, including the View, West Portal Monthly, Richmond Review, Sunset Beacon, Westside Observer, Castro Courier and Alameda Sun, among others. He’s remembered by many for his unflagging dedication to hard work and easy-going nature.

Born and raised in Oldenburg, Germany, Tangermann immigrated to the United States in the late-1960s, settling in San Francisco. While working on a cruise ship he met his former wife, Madlen Tangermann, with whom he fathered two daughters, Heidi Plank and Birgitt Brown.  Native Californians, they now live in Colorado and Virginia, respectively.

“He grew up running river boats with his uncle,” said Plank. “He always loved the water. He never lost his love for boating.”

Plank recalled fond memories of helping her father with deliveries on weekends, along with her sister. In the mornings before venturing out on the route, Tangermann would cook them a big breakfast. When not working, he took them camping and on other outdoor adventures. Both Tangermann and Madlen kept close ties with family in Germany, and would frequently take their daughters there for visits during summer vacations.

Tangermann pursued his boating hobby throughout life, and was an active member of the Alameda Yacht Club. Most recently, he lived on a boat at the Fortman Marina with his girlfriend, Judy Schilling. In addition to boating, Peter had a great passion for woodworking and canine companions. Though unable to have a dog on his boat home, he’d enjoyed having many of the animals throughout the years.

“He would build wooden model ships from scratch on the weekends,” said Brown. “He was very handy with wood. There’s a storage unit full of boats he made.”

Tangermann began his delivery service in 1968, steadily expanding over the decades, from distributing samples to flyers and, ultimately, many of the region’s newspapers. Arron Clark, who volunteers for Martin de Porres House of Hospitality, worked for Tangermann for 19 years, and warmly remembers his great sense of humor and the patience he showed people from all walks of life.

“He employed a lot people and was willing to give anyone a job who wanted to work,” Clark said. “He never got to retire and not long ago was loading bundles of papers. Those of us who worked with him didn’t get a chance to share how much he meant to us.”

“He was a great guy and was very helpful to many people,” expressed Glenn Gullmes, publisher of West Portal Monthly. “His good sense of humor and generous nature will be sorely missed.”

“The last time I saw him, a few months ago, while he was delivering the View, I joked with him about when he was going to retire,” said Steven Moss, View publisher.  “He told me he had a few more good years in him.  I wished that’d been true.”

A memorial gathering in Tangermann’s honor was held on Sunday, January 21 at the Alameda Yacht Club.