There are many perfect days to be had within the plentiful sunshine and amiable neighborhoods of Southeast San Francisco. For a lazy, or not-so-lazy, day off, Dogpatch, Potrero Hill, and surrounding areas offer enough activity and diversion to render unnecessary a trip elsewhere in the City.  There’s a particular pleasure, beyond even the convenience of it, in staying close to home. 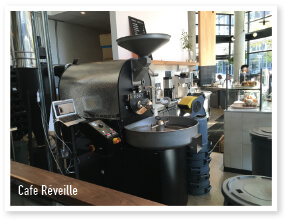 A good way to get the day started is, naturally, with a caffeine fix—and possibly breakfast —at Cafe Réveille, 410 Long Bridge Street, the latest expansion by the Réveille Coffee Company, which began inside a truck parked at Jackson Square before establishing brick-and-mortars in North Beach and the Castro. The Mission Bay location functions not only as the company’s most ambitious restaurant, offering full menus of breakfast – before 11:15 a.m. – lunch, and weekend brunch, but as its central roastery, with the machinery in full view of curious patrons while the fancy coffee—“Guatemala Chochajau;” “Burundi Gaharo”—is expertly produced.

An abundance of natural light floods the coffeehouse’s modern interior, nearly blinding the baristas at certain times of day while creating wonderful conditions for Instagramming lattes. At this popular communal spot, surrounded by unoccupied storefronts, it’s possible to experience the first stirrings of a new neighborhood—with luck, perhaps genuinely stylish rather than just generically sleek—in Mission Bay’s medical-biotech-condominium zone. Note: the accent mark over the e suggests that “Réveille” is pronounced like the French third-person verb for “wake up” (ray-vay), not the bugle-related military term in English (rev-uh-lee). 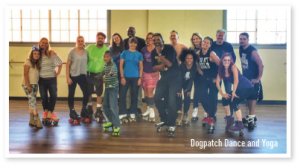 Next, it’s time to work on your already neglected new year’s resolution to exercise more: signup for a class at Dogpatch Dance and Yoga, 435 23rd Street, which opened in October with an uncommonly eclectic variety of instruction, with styles ranging from line dancing to K-pop to rollerdance (!). You can even learn how to twerk. As the world’s worst dancer, I chickened out on this one, but owner Kafi Payne assured me that, in fact, “almost all of our classes cater to beginners. We pride ourselves on being a welcoming and inclusive environment.”

If you haven’t noticed Kafi’s studio that’s probably because it’s invisible from the street. If you head east on 23rd you’ll see an enormous storage facility just before the road ends at the Bay, with a green-awning entrance past the gate on your right. Dogpatch Dance and Yoga uses the same entrance as the storage company, occupying much of the building’s second floor. A coupon is currently available on Groupon. 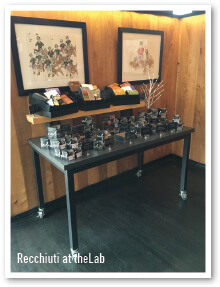 Once you’ve finished cutting a rug or two, you’ll likely feel entitled to reward yourself with a treat or three at Recchiuti at theLab, the artisanal chocolatier at 801 22nd Street. This newest incarnation of Recchiuti’s Dogpatch presence opened in November, but the owners have been creating their confections in the neighborhood for two decades; they previously operated a cafe at the same address, which closed in 2014 due to regulatory hurdles, as well as a smaller retail space called Little Nib just down the street.

Recchiuti at theLab, like the Recchiuti store in the Ferry Building, sells smallish packages of unfathomably elegant and delicious special-occasion chocolates. The Dogpatch shop additionally puts forth a Friday to Sunday menu of freshly-made desserts, including whoopie pies and cookies. There are two varieties of hot chocolate available daily.

By now, the evening will be near, which means that you might be tempted to consume a pre- 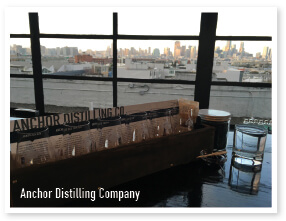 dinner drink. There are a number of excellent bars in Dogpatch, but for a unique imbibing experience visit Anchor Distilling Company, 1705 Mariposa Street, for an expert-led tasting, which can be booked online. Anchor Distilling shares the premises of the legendary Anchor Brewing Company, whose tours constitute Potrero Hill’s best-known tourist attraction. Unfortunately, reservations for these tours often must be made months in advance, but Anchor Distilling—which, having opened to the public for the first time in April, remains a lesser-known destination —will often have same-day availability for its tastings, which run two or three times daily from Thursday through Saturday.

At $35 per person, the liquor tastings cost more than the beer tours, and focus primarily on the beverages themselves rather than on the means of their production, which takes place in a small distillery in a basement far too cramped to accommodate tourists. The tasting is held on the facility’s uppermost floor—which offers an opportunity to look at the brewery on your way up several flights of stairs—in a newly decked-out private barroom, adjacent to a rooftop herb garden. This floor previously served as a pied-à-terre for the company’s famous, now retired founder, Fritz Maytag; the bathroom I used remained equipped with a shower.

On my visit the guide’s unpretentious lecture started with a rundown of the intertwined histories of Anchor Brewing and Anchor Distilling before diving deep into the nuances of six small-batch spirits: three gins, two whiskies, and a vodka, of which the lowest alcohol by volume was 45 percent. The sample pours were quite adequate.  I found myself admiring the complexity and integrity of Anchor’s products with an increasingly pleasant vagueness as, from my perch beside the barroom window, I watched a magnificent unobstructed sunset over the San Francisco skyline. 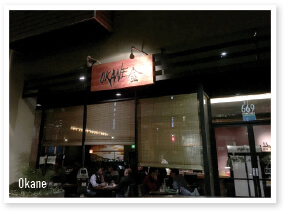 For dinner the options are endless.  In the Design District there’s an unheralded world-class sushi joint, Okane, at 669 Townsend Stread. The casual sibling to the imposing (read: very expensive) Michelin-starred Omakase next door, Okane borrows some of its premium fish from its sister restaurant.  The menu includes an impressive array of delicate yet comforting vegetables, noodles, and meat dishes. With a small, intriguing selection of rare Japanese beers on tap and an unbelievable house-made sesame ice cream, Okane is as much an izakaya – Japanese pub – as it’s a sushi bar.  It’d be easy to spend the rest of the night there.

This new monthly feature provides a series of 12-hour proposals—configurations of potential perfection within the paces of daily life—for residents and visitors to the land once known as Rancho Potrero Nuevo, more or less between the waterfront and the Mission.  Send your nominations for possible inclusion to editor@potreroview.net.

A handful of civic organizations track land use changes in Dogpatch and
A proposal to open a cannabis dispensary at 667 Mississippi Street will
Cycling Potrero Hill can demand more than a strenuous climb or two…or
PlayGround, a resident company and founder of Potrero Stage, located on 18th
Decathlon, one of the world’s largest sporting goods retailers, opened an outlet
Go to Top